Invictus Energy Limited (ASX:IVZ) is advancing the activities of its 80% owned and operated Cabora Bassa Project in Zimbabwe. The Company announced a series of significant developments and has also provided its forthcoming plans pertaining to Cabora Bassa. 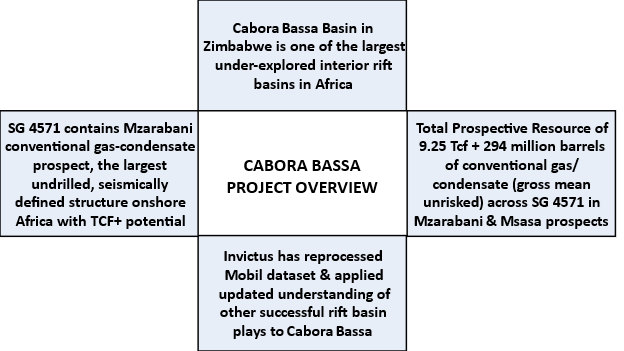 The seismic data acquisition will commence in the first week of September. Preparations have progressed well with 400 km of line clearance completed ahead of the commencement of data acquisition-

The shooting of an initial test line will determine the optimum data acquisition parameters to suit the objectives of the program. Invictus notified that with the help of the latest generation STRYDE wireless nodes which are less than 25% of the weight of comparable systems, the laying out and retrieving of the wireless nodes will be significantly easier and cheaper. Having said that, the survey can utilise a swath shot methodology.

The methodology will double the seismic data coverage by providing an effective line spacing of 800-900m and provide a high resolution subsurface dataset at minimal incremental cost.

Notably, the use of the STRYDE nodal system may also result in a lower environmental footprint, given the reduction of vehicles and personnel required to deploy the nodal system compared to cable system.

Besides this, the rig selection process is advancing. Discussions with shortlisted rig providers as well as drilling services providers is ongoing. The process is expected to be completed by the end of the September quarter which will then be followed with the formal award of drilling and services contract.

Invictus is expanding its Corporate Social Responsibility (CSR) program in the Muzarabani and Mbire District, focused on the provision of water to communities. Water is a key enabler to other CSR initiatives that Invictus wishes to initiate in the future and is the key to life in remote communities. It is also the most sort after community request.

During the current seismic survey program, Invictus is taking cognisance of the submissions from the Environmental Impact Assessment and feedback to its Community Liaison Officers from ongoing consultations with the local community. The Company will undertake to effect repairs and/or rehabilitate or drill new boreholes and install four metre high water tanks on stands to provide water storage and where appropriate solar pumps.

Invictus has completed the tendering process for long lead drilling items (wellheads and casing) which is awaiting formal award.