Diversified company BPH Energy Limited (ASX:BPH) has been rapidly growing its presence in the oil and gas (O&G) sector through its investee firm Advent Energy Ltd. And 2021 seems to be an interesting year to track the drilling updates on this front.

BPH possesses a significant stake of 22.3% in Advent, whose principal activity is to maximise its gas resources.

Interestingly, Advent’s permits are situated next to a ready market deemed by Advent as an outstanding infrastructure, thus maximising its potential to optimise any resources.

Advent’s PEP11 permit is a high impact exploration project that remains one of the most important untested gas plays in Australia.

The oil and gas entity considers PEP11 to be a substantial structural target that can contain multi-tier natural gas resources. 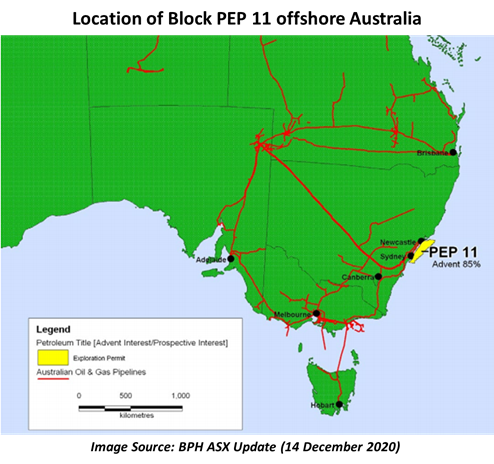 The AEMO or the Australian Energy Market Operator has cautioned that the developed gas reserves in south-eastern and eastern Australia are expected to meet projected demand for only a short span of time.

The AEMO has also warned about possible supply shortages sprouting on the east coast of Australia within five years, especially in the southern states.

AEMO’s warning has heightened the critical positioning and prospectivity of the PEP11 permit. Moreover, the gas supply crisis has created a substantial market opportunity for Advent to raise the funding for drilling with the aim of advancing the PEP11 project.

In January 2020, Asset Energy Pty Ltd submitted an application to NOPTA or the National Offshore Petroleum Titles Administrator to allow the drilling of Baleen target. The application includes the extension of PEP11 permit title for up to 2 years to enable the drilling and removal of the requirement for a 500 km2 3D seismic program. 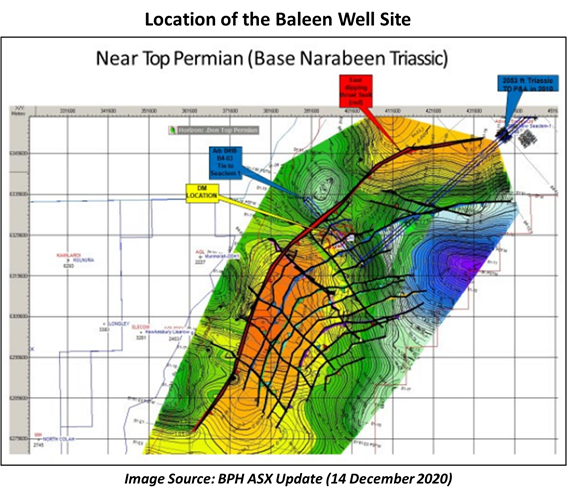 Notably, NOPTA has confirmed that the application has reached the final decision phase and Advent anticipates the decision shortly. Asset Energy and Bounty Oil are moving to a drill-ready status for PEP11 permit, subject to NOPTA approval.

Recently, Advent announced its plan to raise up to $6.5 million capital. This is undeetaken via a non-renounceable entitlement issue of 2 Shares for every 3 Shares held by Shareholders registered at the Record Date at a price of $0.05 per share.

The Offer is expected to close on 26 February 2021 at 5:00pm (WST). It is worth noting that the Offer is partially underwritten by Grandbridge Securities Pty Ltd up to the amount of $1 million.

Advent intends to use the funds raised through Offer for the following purposes: 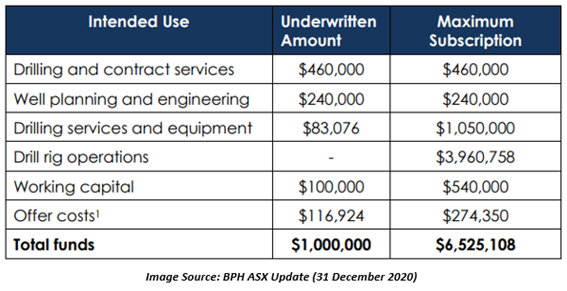 Advent anticipates that if all the Shares are subscribed for, the proceeds raised from the Offer will be sufficient to meet its short-term goals over the next 18 – 24 months.

BPH Energy’s investee Advent, together with Bounty Oil and Gas NL, is committed to explore for and eventually exploit any petroleum accumulations that may be identified in the PEP11 title area. Towards this end, Advent is continually looking for and evaluating potential sources of both debt and equity funding.