The new discovery drilling at the project was undertaken as a part of Horizon’s 50,000 metres exploration program for 2021, and 57 aircore holes were completed for 2,097 metres to a maximum depth of 76 metres. Notably, the areas between the Eureka gold mine in the central area and Capricorn prospect (100% owned) to the south were targeted that have witnessed limited modern exploration, particularly at depth. 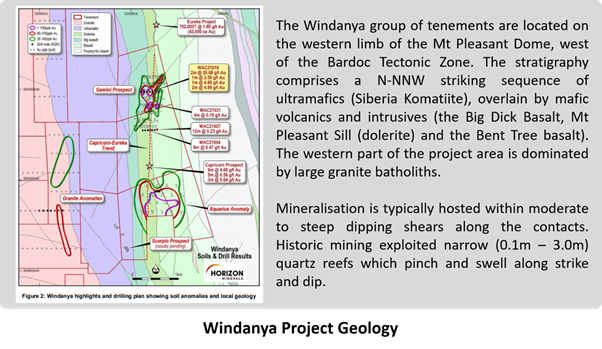 Results from the Program

The aircore drilling program was wrapped up in two parts during 2020 and 2021, with numerous new targets generated as well as assessed last year.

The priority target area was 1.5 kilometres north of the Capricorn prospect, where an exceptionally high order anomaly (626ppb Au) has been outlined by ultrafine (-2µm) soil sampling against a background of less than 30 ppb Au.

Horizon drilled six aircore holes across the anomaly with the best results generated in the discovery WAC20019, which intercepted shallow, high-grade mineralisation within 35 metres of weathered quartz stockwork.

Between WAC20019 and Capricorn, the drilling of the two further east-west lines returned shallow, anomalous hits signaling the intersection of a postulated North-South striking mineralised structure, which nominally extends for 3.3 kilometres.

The Company has yet to fully test Aquarius anomaly that returned several high-order ultrafine soils (up to 623ppb Au). Moreover, historic mineralisation in some old RAB holes (up to 5.0g/t Au) were drill tested via five holes stationed immediately north of the Aquarius anomaly. However, the results cannot be replicated.

Thirteen holes were drilled at the Scorpio prospect, where minor gold was returned from historic drilling. Moreover, the Company completed eleven holes 500 metres North-West of Scorpio for testing several small and undocumented abandoned workings in an ultramafic rock.

Way Forward for Exploration at Windanya

Assay results are pending, and the Company has planned further aircore as well as RC drilling to be undertaken in the June Quarter of 2021. The drilling this year will continue across the new mineralised trend.

Horizon intends to follow up the prospect, named Gemini, with RC drilling and further results are anticipated in the June Quarter.