Minerals explorer Raiden Resources Limited (ASX:RDN, DAX:YM4) has shared the findings of review of the historical data from the Yandicoogina Project in Pilbara region. The Company successfully identified significant gold intercepts from the shallow holes drilled back in the 1980s. The companies that drilled those holes did not execute any follow-up work despite having such high-grade intercepts. The data that have been reviewed by Raiden is mainly from three prospects- Uncle Tom, Black Shepherd, and Eastern.

Mr Dusko Ljubojevic, Managing Director of Raiden Resources, expressed his views on the result and commented:-

The Yandicoogina Project is spread over 90 km2 and includes two granted exploration licences and two granted mining leases. The Klondyke gold deposit of Calidus Resources (ASX:CAI), which is under development, lies around 30km to the north-west. 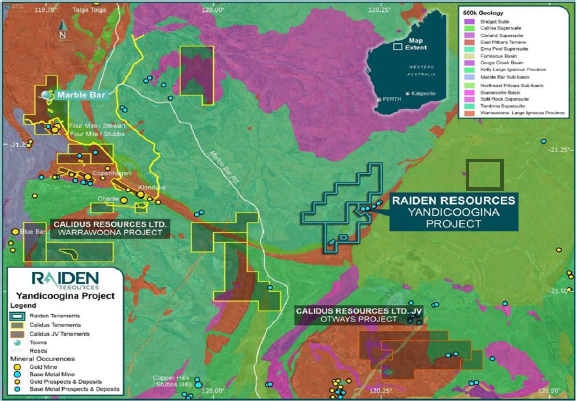 The Yandicoogina Mining Centre has record gold production of 227.3 kg of gold at an average grade of 58.2g/t Au. Gold mineralisation is observed in quartz veins in chlorite-carbonate altered schist.

In the past, the tenement has undergone geological and geophysical surveys, including the sampling program, surface and airborne survey and very limited drilling at the historical mining centre.

Significant intercept data from the review work are down below:- 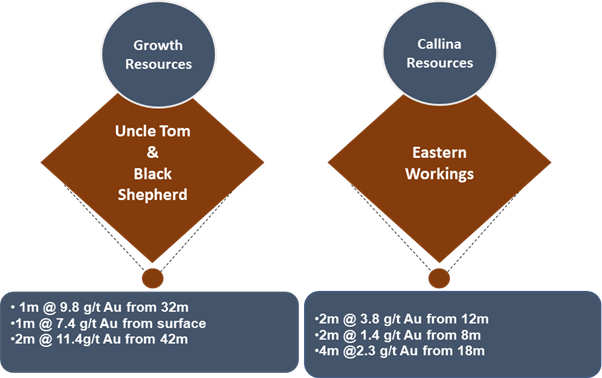 Growth Resource had drilled seven RC holes on the Uncle Tom (M45/987) and Black Shepherd (M45/115) prospects with a combined depth of 312m. The data from the reports of Growth Resources indicate that the main lode of Uncle Tom has mined width of 0.2-0.6m, strike 060 degrees and dips 45 degree south. The strike can be traced up to 245m.

Similarly for the Black Shepherd, the main lode strikes east-west and dips at 38-50 degrees. The main strike could be traced semi-continuously for 480m.

On Eastern workings, Callina Resource drilled five RC holes in the year 1988. There, the quartz lode system strikes 025 degrees and dips between 45 to 70 degree east and remains exposed over a 760m strike.