Creso Pharma Limited (ASX:CPH, FRA:1X8) updated the market on Monday that its acquisition target, Halucenex Life Sciences Inc, has signed a Letter of Intent (LOI) with Sixth Wave Inc, which is a prominent nanotechnology firm. Creso Pharma also provided an update on the recent legislative change in North America about the possession and use of psychedelic compounds, which could benefit Creso Pharma and Halucenex in the future.

Halucenex and Sixth Wave have signed a Letter of Intent to work on developing a Definitive Agreement by 31 May 2021. Both the parties are set to work on creating beads and columns to assist the production of psilocybin isolate from the distillation of the product.

This will allow Halucenex to manufacture a natural pure psilocybin product for further R&D. It will also offer accurate dosing of psilocybin to treat mental disorders. 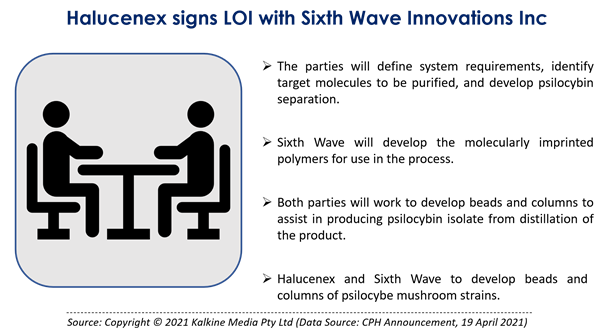 Halucenex to conduct research into the health and wellness

The two parties will develop columns and beads psilocybe mushroom strains’ other wellness components, including norbeocystin  and baeocystin.  Furthermore, Halucenex can carry out research for the health benefits of these molecules, with no hallucinogenic effects of psilocybin present.

Halucenex anticipates that work done in collaboration with Sixth Wave will also complement the Advanced Extraction agreement and the Growing Together Research Inc (GTR). Halucenex and GTR can identify important psilocybe genetic markers, facilitating the extraction as well as separation processes to offer consistency and purity of the compounds.

Sixth Wave in a nutshell

Halucenex to use patent-pending technology of Sixth Wave

Interestingly, Sixth Wave has collaborated and undertaken R&D initiatives with some of the largest entities in the chemical, resources, security, defence and medical sectors.  The systems are patented or patent-pending in more than forty countries.

The application of Sixth Wave’s patent-pending nanotechnology to purify the botanical psychedelics will streamline the processes and provide a sustainable method for utilising natural plant extracts contrasting the use of synthetic molecules. The use of synthetic molecules may not offer similar access and flexibility to use the plant-associated compounds for attaining the best clinical advantages.

Halucenex anticipates using the patent-pending technology, alongside agreements with other key partners, to expand its R&D initiatives.

In another exciting development, the Company has welcomed the latest motion to move towards the legalisation of psychedelic substances in California.  The Senate Public Safety Committee approved Senate Bill 519 on 13 April 2021.

The Bill would make a comprehensive range of psychedelic substances legal to use and possess for adults over the age of 21, as well as remove any previous criminal offences for use and possession.

The Bill has been launched to progress a more health-focused methodology to the use of psychedelic compounds and to address the current mental health crisis in the US.

Moreover, it also marks the ongoing push towards acceptance of psychedelic compounds as an alternate treatment route.

Creso Pharma will work with its Director of US Business Development, Mr John Griese, to progress opportunities in California if this bill turns into law.

DO READ: Creso Pharma aims to make inroads in US cannabis space with latest appointment

Adam Blumenthal, Non-executive Chairman of Creso, stated that the recent LOI with Sixth Wave is a significant development for Halucenex and can offer substantial upside to near term initiatives in the clinical trial as well as cultivation activities.

Adding to this, Bill Fleming, Founder and CEO of Halucenex commented-