Greenland Minerals Limited (ASX:GGG) has systematically advanced the development of the Kvanefjeld Rare Earth Project since 2008 in southern Greenland. So much so, the Project is now on the brink of being issued with an exploitation license.

The Kvanefjeld Project is underpinned by a JORC-code compliant resource of more than 1 billion tonnes, and an ore reserve estimate of 108 million tonnes to sustain an initial 37-year mine life. It offers a new, simpler path to rare earth production than traditional refractory sources. Besides, Greenland Minerals’ 100% owned project has the potential to be developed as a large-scale, low-cost producer of critical magnet rare earths including neodymium, praseodymium, terbium and dysprosium. 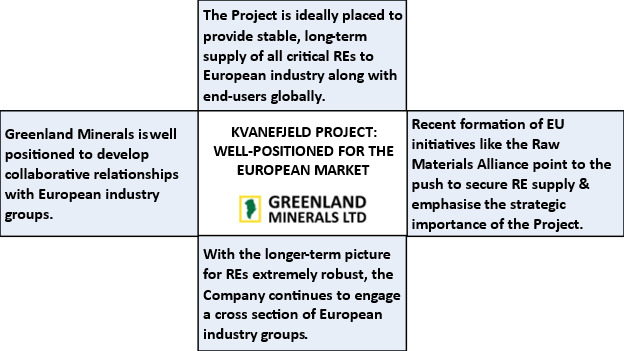 This is an important milestone in the Greenlandic Government's formal decision-making process in relation to the issuance of an exploitation license for the Kvanefjeld Project.

“Outcomes of the public consultation will play an important role in focussing future stakeholder engagement and shaping the path forward for the Kvanefjeld Project”, says Managing Director John Mair.

Greenland Minerals has largely completed the responses to issues raised during the first round of public meetings and in submissions made in the 36 weeks of the public consultation period. Many submissions were received by Government in the final days of consultation and the Company has started to develop responses to these submissions.

Notably, the Company has been able to address most submissions made to the Government, and most issues raised during public consultation meetings, by reference to material contained in the impact assessments and the expert reports which were commissioned to support the assessments.

Besides, the Company has been in communication with Greenland’s Mining License and Safety Authority to ensure that transcripts of the recent public meetings are made available as soon as possible to identify any final issues for inclusion in the White Paper.