The Offshore Sydney Basin contains Advent’s high-impact exploration project, the PEP11 permit, which is potentially one of the most significant untested gas plays in Australia. Advent’s initial focus is to carry out drilling at the Baleen target located in the PEP11 permit offshore NSW.

As per the report, it is significant that the sediment directly above the largest fault is disturbed & distinctive circular depressions appear in the sea floor. These depressions are possibly caused by methane gas and fluid from the Permian coal measures that are escaping along the fault plane.

Furthermore, the report notes several depressions on the seafloor on the mid-slope between the Newcastle Canyons. These are large features that extend 750m across the slope, with side scarps showing floors 70 m below the rims and slopes over 20o.

These features result from gas and fluid expulsion from subsurface units and resemble those found on side-scan records from the Mississippi Delta called “collapse depressions”. (e.g., Prior and Coleman, 1980). As per the report, it is deemed likely that the features found off Newcastle are also depressions formed from methane gas and/or fluid escape. 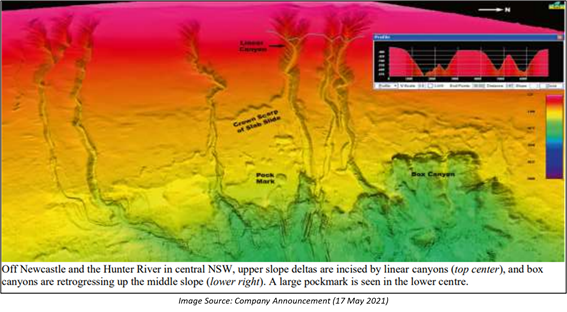 Interestingly, these observations hint at higher success potential of hydrocarbon exploration in the PEP11 permit.

The PEP11 Joint Venturers, Advent and Bounty Oil, note that any gas discovery in this permit will be for the benefit of industry and consumers and create new NSW jobs. Besides, the gas project will be consistent with the Government’s policy emphasis on gas supplies for the Hunter Region for normal domestic uses in NSW and as a transition fuel for electric power generation. 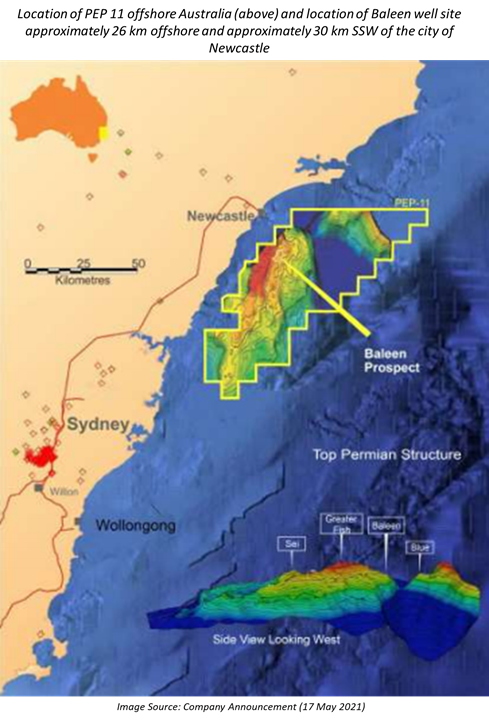 A report released by the Australian Competition & Consumer Commission (ACCC) on the gas supply market in February 2021 confirmed that gas prices were still higher than export parity and the risk of a supply deficit remains. Commenting on the report, Treasurer Hon. Josh Frydenberg said the Federal Government will continue to take robust action to make sure domestic gas users get the best deal.

Notably, the Federal Government has also announced funding incentives for carbon capture and storage (CCS) in the recently released Budget. The Government’s focus on CCUS (Carbon capture, utilisation and storage) has highlighted the additional objective of the Baleen Well drilling for Advent. Previously, BPH revealed that the Baleen well program offers significant environmental benefits in CCS (carbon reduction) for the greater Sydney/Newcastle area.

It is imperative to note that the Baleen project is the closest potential offering of storage capacity for CCUS to Newcastle/Sydney that produces about one-third of Australia’s carbon dioxide emissions.

Do Not Miss: BPH Energy ends Q1 2021 on a strong financial note