Premium gold exploration and development company First Au Limited (ASX: FAU) has announced the upgradation of the JORC compliant inferred resource at the Gimlet gold project to 120,000 ounces of gold.

The upgraded Mineral Resource Estimate (MRE) include 1,166,000 tonnes ores at a gold grade of 3.2 g/t for 120,000 gold ounces at a cut-off of 1 g/t gold. The new estimate represents a 73% increase in the inferred resource from the previously estimated resource base of 69,000 ounces of gold at 3.3 g/t and cut-off grade of 1.3 g/t Au. Additionally, mineralisation at Gimlet remains open at depth.

Premium gold project in the vicinity of established gold operations

The Gimlet gold project is located in the vicinity of established infrastructure with over five gold mills within trucking distance. The tenement is highly prospective for gold and is dominated by metamorphosed felsic and intermediate volcanic rocks of the Black Flag Group of the Kalgoorlie Terrane, Yilgarn Craton. 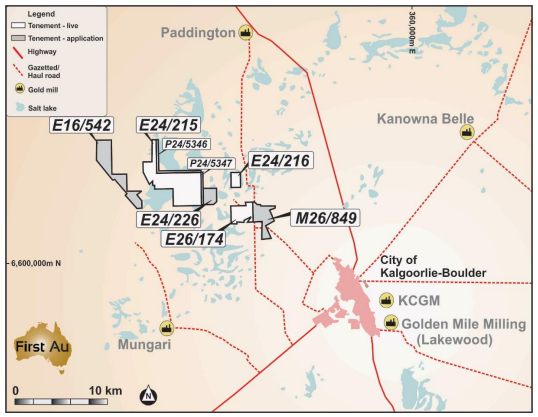 First Au has already completed numerous aircore and RC drilling programs at the project, which recorded intercepts, including 3m at 462 g/t Au from 52m. The mineralisation is interpreted to be associated with the NNW-SSE near-vertical structure from the magnetic imagery and the geological logging of the drilling campaign.

The mineralised structure extends into Horizon Resources' (ASX: HRZ) Teal Deposits, which include Teal, Jacques Find, and Peyes Farm, totalling 288,000 oz gold. These resources are located along the 2.7 km strike, suggesting the presence of a substantial mineralising system. The mineralisation is understood to be related to the Abattoir Shear, a regional structure and gold-carrying conduit.

The mineralisation at Gimlet is dominated by sulphide minerals, including arsenopyrite, sphalerite and galena. The fresh mineralisation zone represents a broad halo of dissemination pyrites related to sericite-carbonates-quartz, containing lower-grade mineralisation (~ 10 - 500 ppb Au).

The majority of the drill holes have been angled and drilled in an easterly direction. The interpretation of the geological mineralisation was completed on 40m spaced drilling and was based on the cut-off grade of 0.5 grams per tonne gold to delineate mineralisation. The resource has been classified on the basis of geological understanding, drill density, grade continuity and depth. The resource up to 100m from the surface has been defined at a cut-off above 1 g/t and 2 g/t for the mineralisation beyond 100m depth.

First Au plans to undertake further optimisation work to assess the economics of the Gimlet gold project. The company will also focus on expanding the gold mineralisation at Gimlet and has planned subsequent exploration programs including aircore drilling to test new structural targets, which were identified during the 2020 litho-structural analysis.

These areas were previously underexplored. The prospective zones include areas along strike of the Honeyeater and Kestrel Prospect, within Horizon Minerals’ Binduli Gold Project, where a successful drilling campaign has been completed recently.