Lithium Australia NL’s (ASX:LIT) joint venture partner in the Greenbushes South Project, Galan Lithium (ASX:GLN) has released an exciting update concerning their lithium project. A review of historical datasets obtained from the Commonwealth Scientific and Industrial Research Organisation (CSIRO) has highlighted the prospectivity of the project. 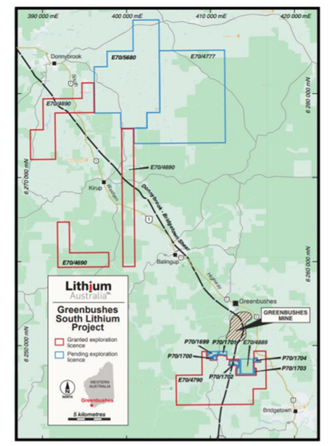 Lithium Australia holds a 20% interest in the joint venture for the project, in addition to 1,221,000 fully paid ordinary shares in the capital of Galan Lithium. Until completion of a preliminary feasibility study (PFS), Galan will pay the Company’s joint-venture expenditure share.

Galan Lithium reviewed the historical laterite geochemistry data along with other geological studies. The review was conducted by Galan’s Competent Person, Dr Luke Milan, who is a Member of the Australasian Institute of Mining and Metallurgy.

The study has defined geochemical anomalies within the laterite soils across the Greenbushes region due to the dispersion of minerals and elements during extensive weathering of the mineralised Li-Sn-Ta pegmatites. Moreover, an elevated abundance of pathfinder elements displays a well-defined anomaly adjacent to Greenbushes South. Tin, arsenic, tantalum and antimony among others are covered under the element dispersion into the laterite profiles.

Galan Lithium now plans to expand this dataset with a focus on the most anomalous area located to the northeast of the project. The data augmentation will be done by extending the soil sampling coverage from the historical datasets. Moreover, the company will undertake mapping and rock chip sampling.

The goal is to confirm historical data and define extensions of geochemical anomalies and therefore potential mineralisation into the company’s Greenbushes South tenure. The results are likely to be used to define potential targets for further exploration such as drilling.

Proximity to World-Class Lithium Mine

The Greenbushes South Project is located 3km south of the Greenbushes Lithium Mine, which is the largest hard-rock lithium mine in the world, managed and owned by Talison Lithium Pty Ltd. The mine produces spodumene, catering to mineral conversion plants in China and Western Australia. It also serves the spodumene concentrate consumers in China, Europe, and North America.

Covering an area of 353km2, the project sits 200km south of Perth in Western Australia.

Interestingly, Lithium Australia NL originally acquired the project due to its proximity to the Greenbushes Lithium Mine.