Aggressive mineral explorer Empire Resources Limited (ASX:ERL) has reported a flurry of developments that took place during the the quarter ended December 2020. ERL’s continued efforts have helped generate significant value with the advancement of exploration at the Penny’s Gold Project.

Let us look at these developments in detail.

At the Yuinmery Project, ERL concluded 76 AC holes for 2,786m during the quarter that was focused on several high-priority geochemical and geophysical anomalies. These anomalies are prospective for VMS-type Cu-Au and Cu-Ni-PGE mineralisation at various prospects (YT01, YT02, YT05, and the YT12). 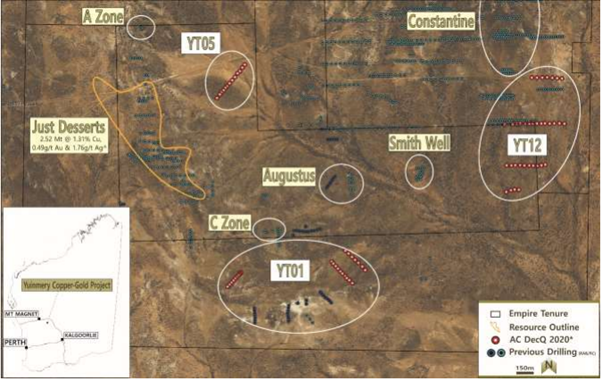 ERL identified the high priority YT01 prospect in late 2019 and it extends over 3.5km in strike length. Further, the recently identified potential for PGM mineralisation at Yuinmery is of immense importance for the Company.

ERL awaits the results from the AC drilling conducted at Yuinmery during the December quarter.

Moreover, ERL has planned to undertake a follow-up RC drilling (which is currently underway) and AC drilling at the Yuinmery Project in the current year 2021. Through RC drilling, ERL plans to target:

Through the additional first pass AC drilling, ERL plans to test the regional gold and base metals targets. Furthermore, a follow-up RC drilling or diamond drilling shall be undertaken, whichever would be suitable.

During the December quarter, ERL continued to advance exploration work at its Penny’s Gold Project. The Company has meanwhile received the results from the aircore (AC) drilling campaign undertaken in September 2020, consisting of 22 holes. 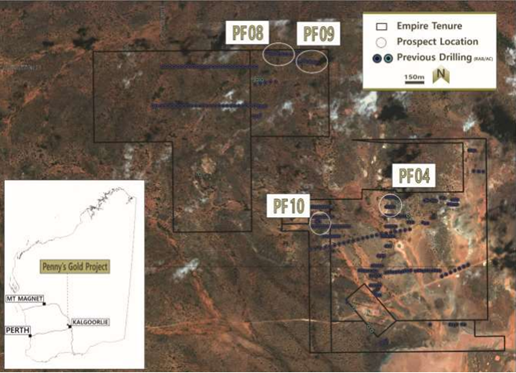 In September, this drilling was aimed at defining the scope of the interpreted supergene gold mineralisation at the PF09 prospect. Consistently, strong gold anomalism was returned from successive holes through drilling. The best gold results were from hole PAC20- 02, which were 12m @ 0.80g/t Au from 40m, including 4m @ 1.78g/t Au from 48m.

Moreover, the Company drilled one first pass RC hole at PF10 during the current quarter, and results are yet to be received for the RC drilling undertaken in December quarter.

Notably, the Penny’s Gold Project has not witnessed any systematic or follow-up exploration since 2010.

During the December quarter, Horizon Minerals Ltd (ASX:HRZ) entered a joint venture with Orminex Limited (ASX:ONX) for development of the Penny’s Find Gold Mine. This is anticipated to fast-track resource definition and technical works to initiate the site work for project development in the first half of 2021.

ERL has hailed it as a positive development and looks forward to additional development of the Penny’s Find Gold Mine in the first half of 2021.

Meanwhile, ERL’s dispute with Eastern Goldfield Milling Services Pty Ltd continues to brew. The dispute is in relation to the gold unaccounted for, following a toll treatment milling campaign in 2017. The Company had submitted the concerned documents to the Arbitrator during the December quarter and the next Arbitration hearing is scheduled to begin in early March of the current year.

Under NTM and Dacian Gold Limited's proposed merger, NTM is subject to a script offer from DCN of one Dacian share for 2.7 NTM shares. The transaction is anticipated to complete in early March 2021.