Diversified minerals exploration company Eclipse Metals Ltd (ASX:EPM) shared an update on the ongoing review of the historical diamond drill core from the Ivittuut cryolite mine and Gronnedal-lka carbonatite intrusions at the MEL2007/45 exploration tenement.

The company has already received the initial batch of samples from historical drill-core and has submitted the samples to Perth-based laboratories for comprehensive chemical and petrological analysis. Samples of the historical drill core from Ivittuut and Gronnedal-lka had been collected by Eclipse from the Greenland Government facility in Kangerlussuaq (Sondre Stromfjord), where they had been stored. 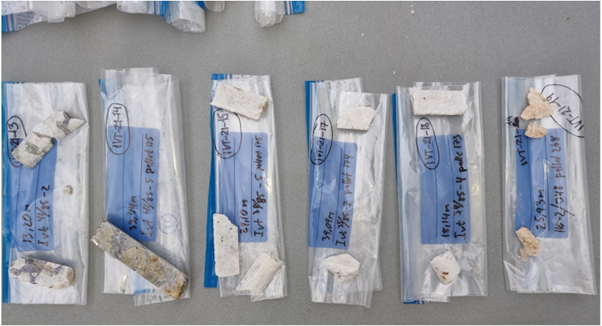 These samples would be used for preliminary testing and would be sectioned and assayed for all cores in compliance with appropriate QA/QC protocols. The preliminary assessment of the core is upgrading the understanding of quartz, cryolite and siderite mineralisation within the pit environ and the potential for Gronnedal-Ika carbonatite complex to host REE. An additional surface sampling program was conducted, and further samples will be dispatched in November 2021.

Further on, Eclipse has also obtained samples from historic tailings dumps and is currently preparing for dispatch to import it to Australia. Substantial exploration targets have been delineated at the quartz mineralised zone.

Eclipse has already plotted drill core samples in the 3D resource model for better visualisation of a highly prospective quartz zone beneath the surface of the existing pit. 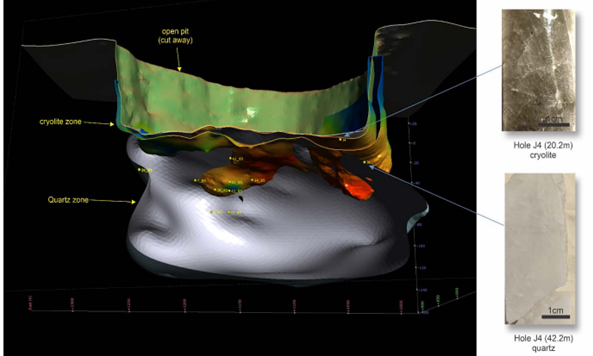 The quartz zone forms a flat and nearly circular intrusive body with a diameter of over 220m and a thickness of ~90m. The modelled domain represents in-situ mineralisation, which could be assessed 5 to 10m beneath the central cryolite-fluorite zone.

Historical grab samples at the Gronnedal-lka carbonatite deposit have returned total rare earth (TREE) grades of up to 34,400 ppm.  Further, a strong correlation has been identified between the REE mineralisation hosted within olivine dolerite dykes and magnetic zones at Gronnedal-lka.

Additional extensive testing would be conducted by an Australian laboratory. Eclipse has identified carbonatite intrusions to be of prime importance. The results of the exploration program will be released in due course.

Ivittuut project is located in southwestern Greenland in the vicinity of a power station and key existing infrastructure for minerals exploration. The project site is also well connected to a heliport and an active wharf with infrastructure. The Gronnedallka carbonatite complex is around 10km from Ivittuut and just 5km from the Gronnedal port. 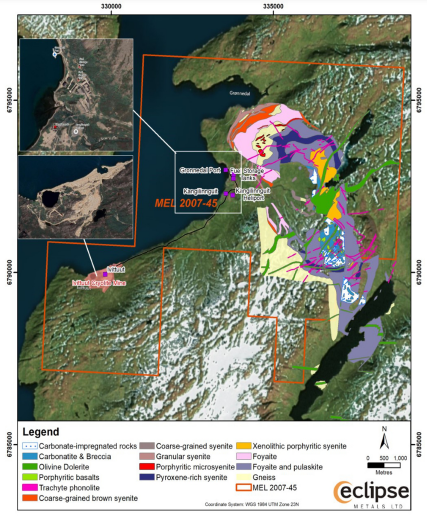 The carbonatite complex is hosted within one of the 12 larger Gardar alkaline intrusions in Greenland and has been widely recognised as one of the prime REE targets in the country by the Geological Survey of Denmark and Greenland (GEUS), together with Kvanefjeld and Kringlerne.

Rare earth elements (REE) are interpreted to occur across the entire carbonatite complex, especially in late-stage veins where REE occurs as various strontium REE carbonate minerals. Europium (Eu) has also been recorded across all intrusive bodies with several times grades exceeding average values for similar geological formations in the Gardar Province and often found in carbonatite.

Must Read: Will Eclipse Metals Seize the Moment as Uranium Demand Heats Up? 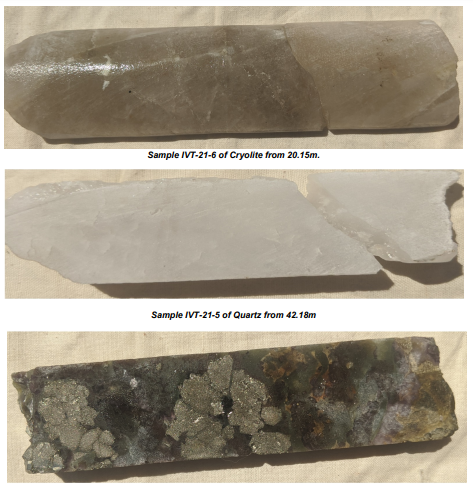 Further, the geophysical analysis of Gronnedal-Ika carbonatite/dyke geological units confirms that the complex is actually more extensive than previously known. A Dighem survey had delineated seven conductive targets which are yet to be followed up by exploration and ground truthing.

The preliminary assessment of drill core samples has already provided substantial insights on the prospectivity of both the Ivittuut mine environ and carbonatite occurrence and mafic dykes. The availability of an extensive core library will help in saving significant cost in delineating the REE prospect in the future.

The onsite team proposes to dispatch further batches of samples from Gronnedal-Ika and the Ivittuut low-grade and tailing dumps to laboratories across Australia and overseas for REE elements, cryolite and quartz analysis. Eclipse continues to evaluate best strategies to unlock the true potential of its Greenland assets, including a potential repositioning of assets to ensure the exploration and development of the Ivittuut Project.

Under the review, Eclipse is undertaking early-stage discussions with third parties for potential joint venture partnerships and other opportunities for its Australian projects and to generate value for its shareholders.