The recently interpreted datasets included information from the government-commissioned regional magnetic and radiometric surveys along with commercial airborne TMI and Dighem surveys. The re-interpretation activity was aimed to identify fresh magnetic/EM anomalies with similar geophysical signatures as the known mineralisation at other mineral deposits in the Gardar Province. 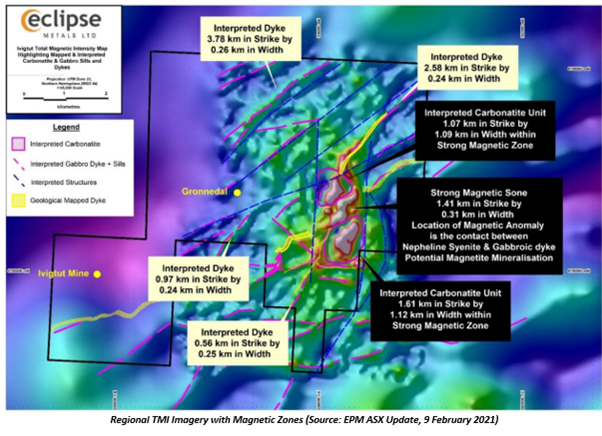 The re-interpretation and re-modelling of the geophysical data have delivered fresh insights about the Gronnedal-lka areas. The program also confirms that the carbonatite/dyke geological units are more extensive, thereby enhancing their prospectivity for REE and sulphide mineralisation.

The magnetic data (1995) delivers the best coverage and resolution over the tenement. The strong magnetic responses were recorded in the eastern portion of the tenement that are closely associated with carbonatite and gabbro bodies. The strong magnetic response outlines the potential of a high magnetite concentration besides highlighting multiple north-east and east-west trending (gabbroic) dykes of which only a few appear in the 1:100,000 mapping.

The Ivittuut mine lies on the edge of a large magnetic low (in the regional survey), indicating a granitic intrusive body. The data resolution in the vicinity of the project is too coarse to define small features to characterise the response of the intrusion.

The Dighem electromagnetic data has defined seven conducting zones, which are likely sourced from either sulphide minerals or magnetite to produce a conductivity-like response in frequency domain EM systems. The large conductive zones along the south eastern and western survey zones are due to sea water in the fjords. The target areas have been identified on the stronger conductors and are suggested to be followed up. 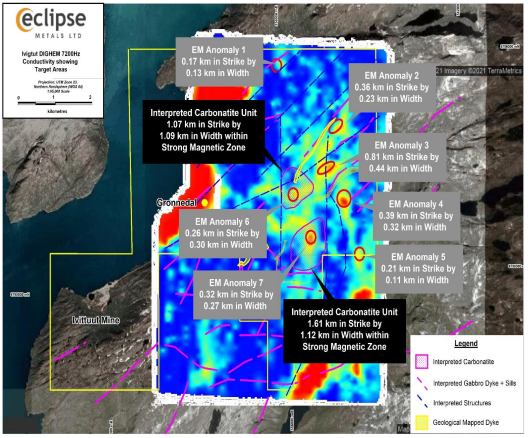 The Gabbroic dykes have been subject to base metal exploration programs with MDA investments making a NI sulphide discovery at Discovery Dyke, ~30km to the south. The Dighem survey has defined multiple conductive targets, representing sulphide or possibly magnetite sources.

The radiometric data is very coarse; however, it indicates anomalous values in the Carbonatites region that may be best defined with the uranium data. The high uranium response in the project tenement should be explored and assessed for additional carbonatites.

Background of the Geophysical Survey

During 1980s, the Geological Survey of Denmark and Greenland (GEUS) captured the most recent geophysical surveys at the Ivittuut project. The regional surveys were conducted by exploration companies and commissioned by the government.