In an encouraging update, Eclipse Metals Limited (ASX:EPM) has confirmed the presence of high-grade cryolite-fluorite zones beneath the Ivittuut pit in Greenland. These promising results were outlined by the 3D modelling based on the historical exploration and diamond drill at the Ivittuut project.

These outcomes validate the presence of additional mineralisation at the historical Ivittuut mine. The compilation and 3D geological and mineralisation modelling of historical exploration data has showcased significant economic opportunities within and surrounding the Ivittuut pit.

The Ivittuut mine was mined between between 1855 and 1987 through stages of production to extract over 3.8 mt of ores with 58% cryolite. The maiden diamond drilling was conducted after more than 50 years of mining between 1912 and 1915. There project was later tested in the drilling programs (1919,1948-1958 & 1985) to test the project area. The latest one was conducted in 1985 to delineate the cryolite mineralisation at the deposit.

Work undertaken at Ivittuut project: Eclipse compiled the historical exploration data mostly from the open file reports from the GEUS portal that required digitisation of the data. The remaining data was sourced from geological maps, assay results and cross sections from the previous operators of the mine.

The lithological and analytical data were reviewed and digitised to create a 3D database. The review ensured that the data and methods used were compliant to the industry standards prevalent during the corresponding time. 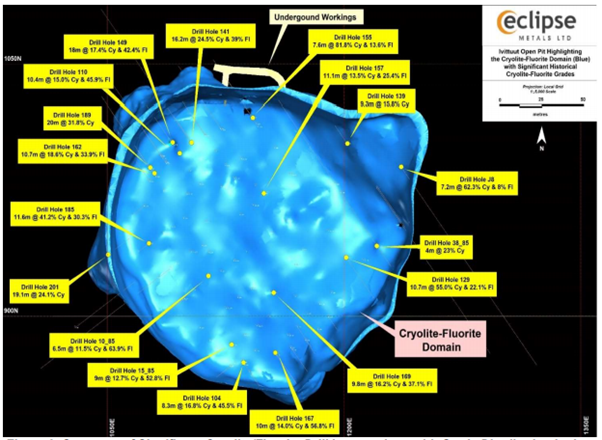 The total data pertaining to 169 holes drilled over 8,100m has been compiled by Eclipse. The analytical data of every drill hole was digitally captured to create a database.

The analytical data included over 488 intervals of Cryolite, 520 intervals of Fluorite, 535 intervals of Iron/siderite and 162 intervals of Zinc. The data was sourced from the laboratory analytical reports on the GEUS Report 20241 and verified the historical cross sections.

The analytical data was reviewed in 3D and create the foundation for the geological modelling.

Domain 1 is circular geological feature, ~200m in diameter,  located immediately below the base and lower edges of the existing open pit. The domain pertains to in-situ mineralisation which can be accessed from the pit.

The domain’s true thickness varies between 4m and 25m. At the corners of the pit, the domain has a thickness of up to 30m.

This domain is flat to shallow dipping southwest and is located immediately beneath the domain 1. The zinc mineralisation within the domain is interpreted to be closely associated to the occurrence of siderite (iron carbonate). While, only a limited work has been done on the project to test the potential for zinc mineralisation, the assay results report grades such as 1.7% Cu, 18.2% Zn and 7.7% Pb within the iron (siderite) mineralised lode.

The Path to the Future

Eclipse plans to commence activities to estimate a JORC code compliant mineral resource at the Ivittuut project, however these will be subject to pandemic restrictions. The preliminary steps include relogging and resplitting wherever possible, sampling and assaying of known mineralised core to delineate a JORC Code 2012 resource estimation during the year.

Eclipse will implement quality assurance and checking (QA/QC) methods together with geotechnical studies. Additionally, Eclipse plans to acquire latest data while working for the GIS and geological database at the project area and surroundings.

The assaying of samples from the quartz zones is already underway. The additional grade and density verification will be critical to the estimation of resources based on the geological modelling completed so far.

Further updates to the market will be released once the interpretation activities are completed.