Mr Griese would concentrate on Creso’s growth opportunities in anticipation of the US federal legalisation of cannabis. Moreover, the appointment is part of CPH’s commitment to expanding its presence in the US after the recent NY state legalisation and New Mexico’s recent legislature, which will legalise recreational cannabis use. 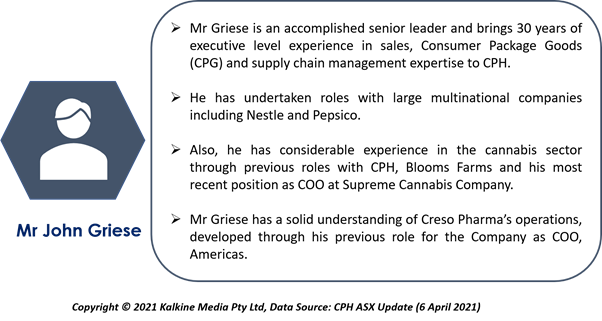 In his previous roles, Mr Griese acquired considerable knowledge of the North American cannabis industry and established relationships he would leverage to boost Creso’s growth.

As the Director of the US Business Development, Mr Griese will engage in revenue-generating and value-accretive prospects in the North American market to establish the Company’s footprint ahead of the recreational cannabis legalisation.

Following the legalisation of recreational cannabis in New York, Mr Griese will focus on New York, Vermont, and other states, to outline a strategy for Creso Pharma to commence product delivery in the US.

Creso’s capacity to export its cannabis-based products into the US is subject to cannabis federal legalisation. Having Mr Griese start distribution, supply, sale, and partnership agreements, pending federal legalisation, provides Creso Pharma with the first-mover advantage in the large US cannabis space. Further, this will also provide the Company a substantial competitive edge over its peers.

After the federal legalisation, CPH anticipates a foray into the US via these alliances and agreements. Besides, this would allow the Company to cater to the major cannabis consumer market worldwide seamlessly.

Creso is confident that its established Canadian operations would offer a first-mover advantage in the US recreational cannabis market following the legislation.

After the recent placement, Creso Pharma and Mernova are well funded to expand Canada’s manufacturing capacity and operations. The Company is prepared to pursue opportunities across North America when possible. While the potential market for legal recreational cannabis in New York State is valued at US$4.2 billion, the US market is expected to reach almost US$30 billion by 2025.

Mernova and CERES to stimulate growth via New York State

Creso Pharma has entered into a non-binding letter of intent (LOI) with CERES Natural Remedies in the US. CERES is a subsidiary of High Fidelity and a leading distribution company, based in Vermont.

With the terms of the LOI, both the companies entered into a formal commercial agreement with the terms on which CERES will sell anibidiol® animal health products of Creso through its established distribution network in the US, subject to cannabis federal legalisation in the US. The Company notified that the terms of the agreement had been extended to 1 August 2021.

Furthermore, Creso’s board and management are currently exploring several opportunities through Mernova and CERES to increase growth via New York State, subject to the US federalisation, following the recent legalisation of recreational cannabis in New York State.

Non-executive Chairman Adam Blumenthal said that Creso was very excited to welcome Mr Griese back to the Company. The board and management are confident that in his new role, he would help unlock several potential opportunities for the Company throughout the US.

Adding to this, John Griese commented: