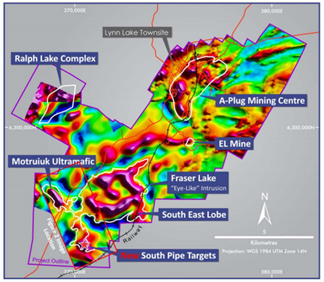 Six priority drill targets have been identified within a large area of conductance to the west of the main FLC intrusion. This phase of drilling will initially target the three highest priority targets, and will comprise approximately 1,600m of core drilling, with subsequent drilling dependent on the outcome of the current drilling.

Must Read: Corazon Mining (ASX:CZN) preps up for the next phase of drill at Lynn Lake

A total of 6 drilling targets have been identified within the large area, west of the primary FLC intrusions. The drilling phase will initially focus on the three highest priority targets and will include approximately 1,600m of core drilling with subsequent follow-up drilling contingent on the out outcomes of the current drilling activity.

The drill results will be released in due course and will include, if appropriate, statements on the definitive visual evidence of sulphide mineralisation.