Coda’s relentless pursuit to upgrade the resource potential at Elizabeth Creek has received a major boost with the discovery of a thick zone of IOCG mineralization in the first deep diamond hole drilled at Emmie Bluff Deeps.

The drilled hole, designated as DD21EB0018, encountered an intense sequence of 200m haematisation and alterations, which encompasses 50m sequence of copper sulphide minerlaisation consisting of chalcocite, chalcopyrite and bornite zones. 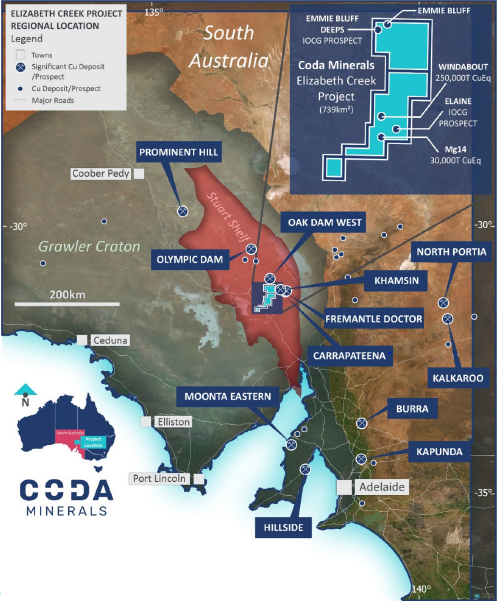 Emmie Bluff Deeps is an iron-oxide copper-gold (IOCG) prospect on the Elizabeth Creek Project in South Australia. The IOCG target lies in the basement rocks below another priority prospect – the Emmie Bluff Copper-Cobalt prospect. The IOCG target is located at a depth of 700-1,000m deep and is similar to Olympic Dam, Carrapateena and Prominent Hill Mines in the region.

Also read: Coda Minerals to get the rods spinning for IOCG targets at Elizabeth Creek 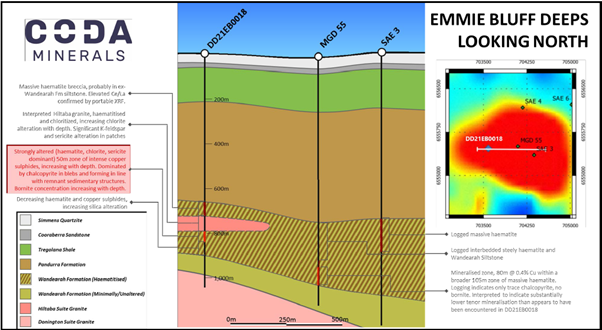 Coda commenced a three-hole drilling program on Emmie Bluff Deeps on 20 May 2021. The assay results for hole DD21EB0018 are being worked out, but the preliminary geological logging and field observations by the experienced technical team suggest that the design objective of the hole has been achieved. The tenor or extent of mineralisation will become more evident once the assay results are finalised.

Hailing the preliminary drilling results as highly encouraging,  Mr Chris Stevens, CEO of Coda Minerals, credited the technical team of the Company for the geophysical and geological work done prior to its listing on the ASX. Mr Stevens also informed that there are approvals in place if the Company wants to drill additional wells on the prospect, and Coda would be mobilising the third rig on Emmie Bluff in the coming days.

“Given the size of the prize and the location of the Emmie Bluff Deeps IOCG Project in a Tier-1 mineral province just 16km from one of the world’s most exciting new IOCG discoveries of recent times at Oak Dam West, we feel that we owe it to our shareholders to pursue this game-changing opportunity with vigour”, Mr Stevens added further.

Hole DD21EB0018 was drilled to a depth of 1,041.6m and terminated in unaltered granite. It was designed to target high gravity anomalism area associated with low magnetic anomalism. The hole encountered a 200m thick zone of intense haematisation and alterations.

The altered zone has 58m zone of haematite in a thick cap and below this cap lies 70m zone of strongly altered granite. Below the granite zone, the drilling bit encountered a 50m zone of variable intensive haematite with a significant copper sulphide component.  The zone of alteration starts from the depth of 797m onwards. 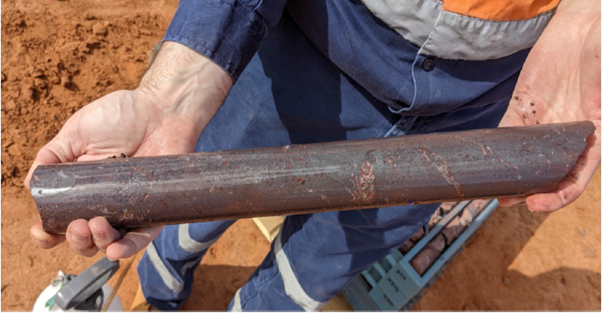 The portable XRF readings have confirmed the presence of elevated copper associated with all sulphide zones. The data has also highlighted the presence of pathfinder element such as lanthanum, cerium, cobalt and molybdenum.

Mr Kieth Jones, Chairman of Coda Minerals, shared his views on the drilling result and commented:-