The pursuit of high-grade copper-gold mineralisation by Coda Minerals Limited (ASX: COD) in one of Australia’s most productive copper belts, yielded high-grade Copper and Gold assay results from Emmie Bluff Deeps deposit at the broader Elizabeth Creek Project. The recent drilling success confirms the company’s exploration strategy and underpins the potential for discovery in the central Olympic Copper Province. 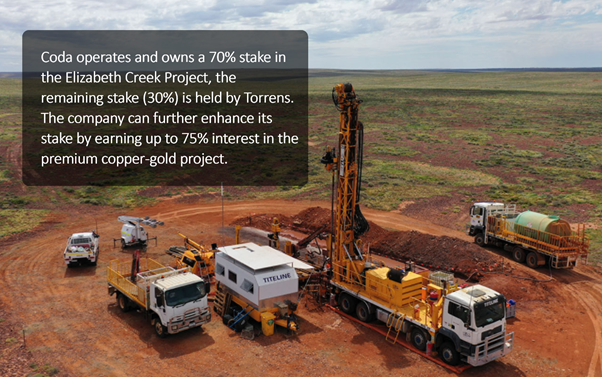 The most prospective sections of the diamond drill core were prioritised for assaying and subsequent assay results will be released in the upcoming weeks, which may include minor additional mineralised intersections. 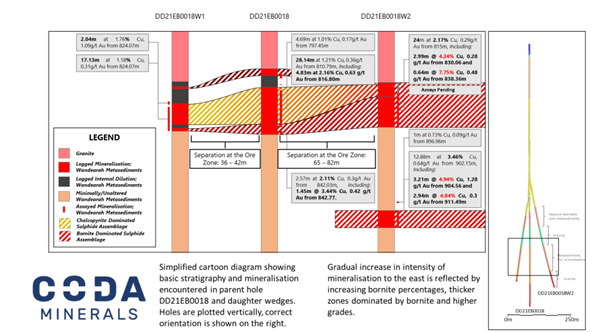 At the parent hole, a total of more than 35m intersections were recorded with copper grades in excess of 1%, with peak grades of 5.39% Copper in the bornite zones and 1.19  g/t Gold in the main chalcopyrite zone. 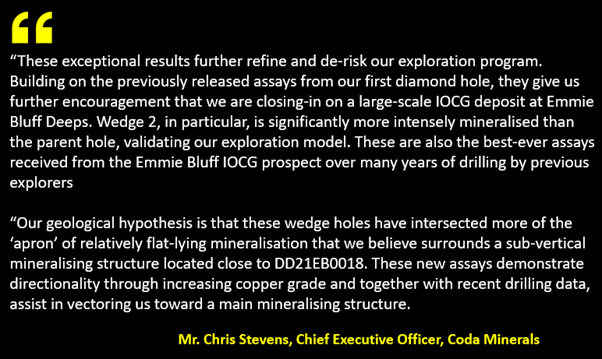 Ongoing activities and the Next steps

Adding on, Mr. Chris Stevens added that the company was particularly excited by the lower bornite-rich zone at wedge 2.  Currently, multiple drill rigs are operating at Emmie Bluff Deeps. The company has drilled a third wedge hole, DD21EB0018W3, northeast of DD21EB0018 and a surface hole DD21EBD0001.

Both holes encountered complex structures and strong haematite alteration and are currently being prepared for assay.

The data from these holes will be used to refine the existing exploration model and assist in identifying priority targets for subsequent drill programs. At present, two surface holes including a vertical hole DD21EBD0002, ~300m ESE of DD21EB0018, and an angled hole DD21EBD0003, ~300m south of DD21EB0018, are being drilled.

The new surface holes are expected to reach the final depth within few days. Currently, multiple drill rigs are operating at Emmie Bluff Deeps. Coda anticipates a further new flow over the next 2 to 3 weeks.

The company follows a two-pronged strategy to define and extend its known Zambian-style copper-cobalt resources across numerous prospects, while also undertaking an aggressive and substantial drill program to assess and evaluate the Tier-1 IOCG system at Emmie Bluff Deeps. With a strong cash balance of over AU$21 million, Coda expects to be placed well on the financial front and plans to ramp up the exploration with multiple diamond drill rigs at the Elizabeth Creek Project.