The preliminary offtake soundings with a suite of leading base metals customers have further validated the strong potential, as the Company has received compelling demand for the high-quality Sorby Hills Lead-Silver Concentrate.

Boab’s Managing Director and CEO Mr Simon Noon expressed pleasure with the outcomes of the initial round of offtaker engagement for the Lead-Silver concentrate from Sorby Hills. He stated that the high desirability for the Company’s Lead-Silver concentrate confirmed by the select group of base metals traders and producers provides Boab Metals with a high amount of confidence. Mr Noon further added that Company would be having binding offtake on exceedingly competitive terms agreed in advance of the DFS completion.

Boab Metals kicked off the Preliminary Offtake Soundings process in January this year with a range of leading base metals customers concerning the Company’s 75% share of the Lead-Silver concentrate that would be produced at its Sorby Hills Project. 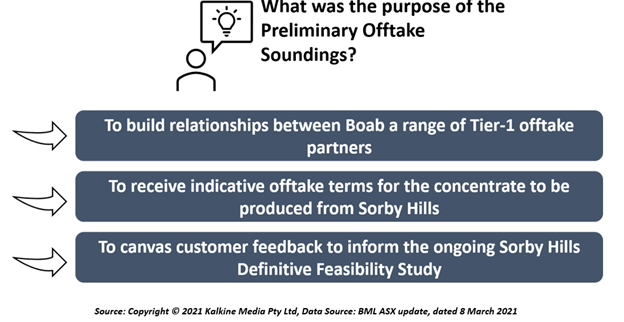 The preliminary soundings have been quite favourable and demonstrated demand for the Sorby Hills Lead-Silver concentrate to be produced based on the detailed Pre-Feasibility Study (PFS) concentrate assay specification.

The Sorby Hills PFS has highlighted strong production potential of the project, with crucial details indicating:

Sorby Hills concentrate is intended to be exported through Wyndham Port, located around 150 kilometres from the site by sealed road. The concentrate’s sale is projected to produce around AUD 2 billion over an initial ten-year mine-life.

The Phase IV drilling program outcomes were recently announced, unveiling substantial prospects to boost the mining inventory at Sorby Hills materially. As a result, Boab intends to kickstart the Phase V drilling program in April 2021 with the express objective to investigate the potential for expansion of the proposed processing and production capacity of Sorby Hills as part of the DFS.

Feedback from initial discussions with potential offtakers provided indicative term sheets for the concentrate from the Sorby Hills. Also, it offered valuable insights for the ongoing DFS metallurgical program and the Lead market generally.

The Company intends to recommence formal discussions with the off-takers and a competitive tender process for the Company’s 75% share of the Sorby Hills concentrate following the completion of the DFS metallurgical program in Q2.

The competitive tender process will be seeking interest from a larger group of potential offtakers compared to those tested during the current soundings process. The Company is aiming to execute binding offtake terms before the Sorby Hills DFS conclusion.