The Company wrapped up the diamond drilling program consisting of 59 holes drilled for 5,284m. The program also saw an addition of 16 new drill holes (1,600m) to follow up prospective leads arising from the ongoing drilling.

At Omega Northwest, 19 holes had been completed, with some holes collared as infill holes targeting structurally controlled mineralisation. The Phase V drilling added at least a 120m strike to the stratabound mineralisation northwest of the current deposit's boundary. The results received for the Omega northwest area are significant, expected to underpin further mining inventory for the Sorby Hills project. 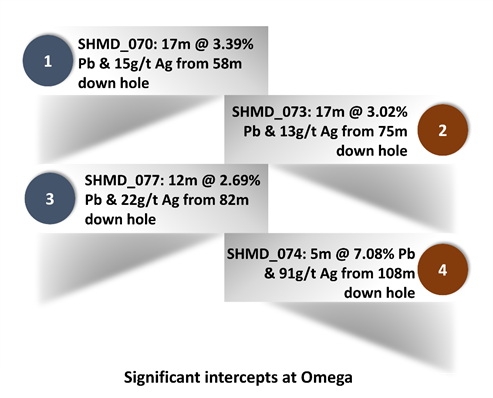 The Phase V drilling of Alpha and Beta is the first time the deposits have been targeted by Boab since acquiring the Project in 2018. These deposits consist of some of the highest-grade silver results across Sorby Hills, with Resources of 2.0 Mt at 5.0% PbEq.

Significantly, the Company drilled four holes at the Alpha deposit and five holes at the Beta deposit. The drilling confirmed the current geological model and the fault as the major host to the zinc-silver dominated mineralisation. Moreover, drilling also confirmed that the mineralisation at the Beta deposit manifests as a stratabound lens like that found at the Omega, Norton, and B-Deposits.

Assay results are pending, with additional drilling of the Alpha and Beta deposits representing a considerable opportunity to expand the Sorby Hills mining inventory.

At the B Deposit, 15 drill holes have been completed after five additional holes were added to the 10 drill holes that were initially planned. At present, there are no assay results available for the B Deposit. However, the Company anticipates a mineral resource upgrade as a result of the Phase V drilling.

Targets outside of existing resources envelopes

Target #1, referred to as the Wildcat Prospect

It represents a historic intercept that Boab initially followed up in 2019 with three RC drill holes. SHMD_087 was drilled as a twin diamond drill hole which intersected:

Target 2, identified as a prospective follow-up target, has a historic intercept with anomalous zinc content between 50 and 80m below surface. Moreover, it also has an association with a significant NNE striking gravity lineament.

Patchy lead mineralisation was intersected in SHMD_083 between 36 and 66m downhole with the best intercept includes 5m @ 1.31% Pb and 6g/t Ag.

Road Ahead for Field Exploration

Boab's technical team has concluded that additional infill drilling would be required at the Beta deposit before applying a high-confidence Resource classification. The diamond drill holes completed so far have improved confidence about the style of mineralisation.