Boab Metals Limited (ASX: BML) surged by over 5% intra-day on 20 May 2021 following the announcement of the commencement of high-impact drilling. BML shares quoted at A$0.4 with market capitalisation of 57.87 million.

Boab is evaluating the development of lead and silver production from Sorby Hills and has kickstarted a 4,200-metre Phase V diamond drilling program at the Project in WA’s Kimberley Region. 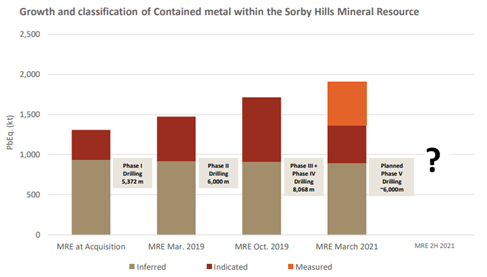 The results of the program will allow the JV partners to investigate opportunities to extend mine life and consider an increase to the proposed production capacity in the Sorby Hills Definitive Feasibility Study (DFS). The success of the drilling of high-impact targets located close to the current open designs together with investigating the Zinc-rich Alpha and high Silver Beta deposits not yet included in the project’s mining inventory will determine the attractiveness of an increased project mine-life and scope.

A minimum of 48 holes is planned in the program, which could be further extended to follow up any significant intercepts arising from the initial round of drilling. Phase V drilling is expected to run until early July 2021, with assays to follow.

The recently completed Phase IV program, which delivered a 56% uptick in Measured Resources at Sorby Hills, will be referred for results and information in the current Phase V drilling.

The drilling program underway is focused on testing and validating the interpretation of portions of the project resource, located near the current open-pit designs, to incorporate the prospective tonnes into the DFS mine plan.

Significantly, near-pit targets would consist of shallow, high-grade portions of the Sorby Hills deposit, presently not included in the Mineral Resource. Let us look at the key focus of the ongoing Phase V Program.

Boab to target Alpha and Beta Deposits for the first time

Some of the highest-grade Silver results across Sorby Hills are included in the Alpha and Beta deposits. While a north-east striking fault hosts zinc mineralisation, the stratabound mineralisation in the hanging wall consists of lead mineralisation.

It is noteworthy that Boab’s drilling program intends to intersect both mineralisation zones and it will be the first time the Alpha and Beta deposits will have been drilled since Boab acquired the project in 2018.

Drilling of the Alpha and Beta deposits signify a substantial and relatively low-risk opportunity for materially extending the mine life of the Sorby Hills. 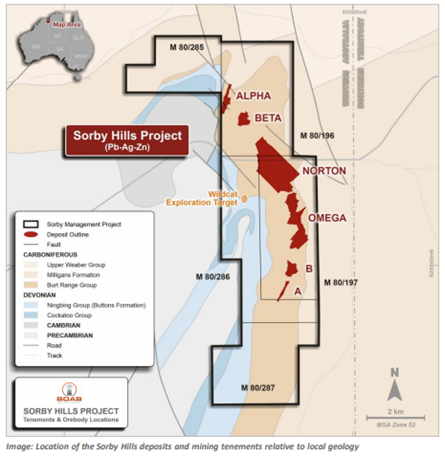 Boab has planned one verification diamond drill hole to test the RC (reverse circulation) drill hole results, which followed up a historic intercept. Boab intersected Shallow-depth supergene mineralisation in the area commencing from 10m below the surface.

The greenfield exploration will be based on targets the Company identified through a high-resolution gravity survey over the Eight Mile Creek tenement (E80/5317), covering an area of 217km2. The tenements consist of a 30km geological strike prospective for deposits like those found at Sorby Hills immediately to the north.

Significantly, previous drilling campaigns across the Sorby Hills have reaffirmed gravity data as a successful vector toward economic mineralisation in the region.