Boab Metals Limited (ASX: BML) is making headway in the process to advance financing  for it’s 75%-owned Sorby Hills Lead-Silver-Zinc Project, located in the Kimberley region of Western Australia. In a significant update, the Company has provided a report about a two-day site visit conducted by the Federal Government’s Northern Australia Infrastructure Facility (NAIF) and several Australian and international commercial mining banks.

The representatives from NAIF and commercial banks joined Boab Metals on the site visit to the Sorby Hills Project and surrounding infrastructure, including Kununurra township and Wyndham Port. The visit was conducted as a part of the ongoing due diligence of the Project and follows positive discussions held with potential project lenders earlier this year. 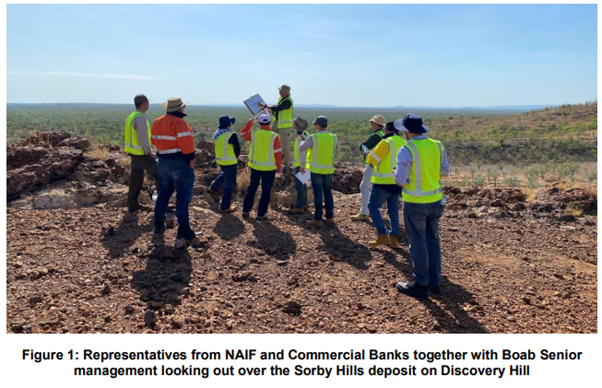 Expressing his gratitude to the visiting executives from NAIF and several commercial banks, Boab Managing Director and CEO Simon Noon commented: “Driving the access roads to the Project, viewing mineralised drill core from the Sorby Hills deposit, and walking the ground where the process plant will be located, provides a unique first-hand experience that we believe will provide potential lenders confidence in Boab’s ability to execute the Project.”

Mr Noon added that the visit to Wyndham Port and Kununurra has helped the visitors understand the Project’s positive impact on the local community. The Company looks forward to continuing its close engagement with potential debt financiers as it proceeds towards a Decision to Mine in 1H 2022.

Boab has been engaged with NAIF on the Sorby Hills Project since 2020. Notably NAIF, an Australian Federal Government organisation with around AU$5 billion of debt finance capacity, can lend funds on concessional terms to support development that generates public benefit for Northern Australia.

Sorby Hills has already passed the Stage 1 Initial Review of NAIF’s Assessment and Approval process. Boab intends to continue working closely with NAIF as they undertake due diligence on Sorby Hills. Meanwhile, Boab is focused on completing the Project’s Definitive Feasibility Study (DFS).

Letter of support from Export Finance

In addition to NAIF, Boab has also received a Letter of Support from Export Finance Australia (EFA), Australia’s export credit agency. EFA confirmed that they would consider participating in the project financing of Sorby Hills, subject to further due diligence and credit assessment.

EFA finance would complement funding from commercial lenders would operate in tandem with other Commonwealth financing bodies to fund commercially viable projects. Projects that increase the ability to extract and process minerals in Australia for export, such as the Sorby Hills Project, may be eligible for support from EFA.

During the June quarter, Boab conducted meetings with several domestic and international commercial banks to progress their interest in the Sorby Hills Project.

The Company confirms that positive feedback from these meetings would be incorporated into the DFS and project execution workstreams.