Boab Metals Limited (ASX: BML) is committed to developing its 75% owned Sorby Hills Lead-Silver-Zinc Project and made substantial progress during the first quarter of 2021. In the current reporting season, the Company has released its March 2021 quarterly report, which boasts a flurry of developments at its high-grade project.

The Company advised that at the quarter-end, it had a A$14.1 million cash balance.

Boab Metals was issued a Letter of Support from Export Finance Australia (EFA) confirming that the Commonwealth Government financing body, subject to further due diligence and credit assessment, would consider participating in raising finance for Sorby Hills JV Project development.

The Company carried out Preliminary Offtake Soundings with a suite of Tier-1 local and international customers for the Lead-Silver Concentrate product from the Sorby Hills Project. The soundings further validated a strong interest in the concentrate product. Significantly, the initial proposals offer attractive terms while confirming the high quality of the product. 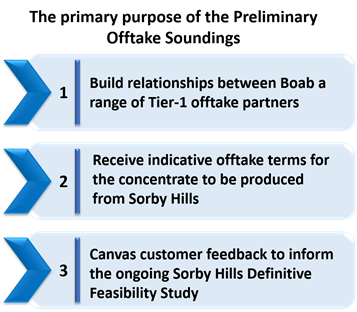 The Company will complete the DFS metallurgical program in Q2 2021 before commencing a competitive off-take tender process for the Sorby Hills concentrate.

Continued and robust Commitment from the JV Partner

After the quarter end, Boab (75% interest) and its joint venture partner, Henan Yuguang Gold and Lead Co., Ltd (25% interest), agreed to accelerate the finalisation of the Sorby Hills Development and Operations Agreement.

During the quarter, Yuguang, the largest Lead smelting company and Silver producer in China, confirmed their commitment to developing the Project and working constructively with Boab towards ensuring bankability and full financing of the Project.

The Company received assay results for the Sorby Hills Phase IV drilling program, in which 58 drill holes were completed for a total advance of more than 4800 metres. The program was successful in collecting metallurgical and geotechnical testwork samples to advance the Project towards DFS status. 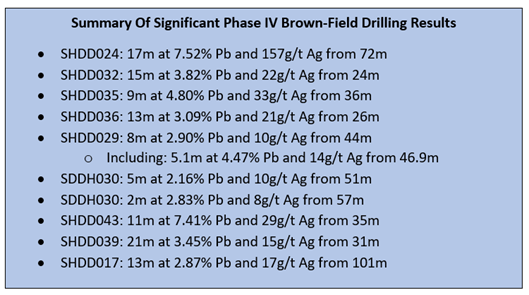 Boab has selected master, schedule and variability composite samples from the Phase IV drilling program and submitted them to ALS Metallurgical Laboratories in Perth. The metallurgical program would investigate floatation, comminution and tailings testwork and incorporating a Dense Media Separation plant into the processing flowsheet as a value-adding initiative.

CSA Global undertook an updated Mineral Resource Estimate, which incorporated the Phase IV drilling program results. The update was released after the quarter.

Significantly, 4.0Mt of Indicated Resources was converted to Measured Resources (up by 56%) while there was also a considerable uptick in shallow Resource tonnes (<60m).

The Company is primed to kickstart a high impact Phase V drilling program, which could further maximise the value extracted from the Sorby Hills deposit for the DFS.

The Phase V drilling result will dovetail with the ongoing DFS Metallurgical program outcomes and serve as inputs to investigate the expansion potential of the currently proposed processing capacity at Sorby Hills.