The Jundee South Gold Project is spread across an area of 720 square kilometres in the northern part of the well-established Yandal Greenstone Belt. Avenira has been holding the tenement permit since April 2020. Some of the major gold projects in the close vicinity of Jundee South includes the Northern Star Resources Limited’s (ASX:NST) Jundee (gold production of 7.8Moz of gold), Bronzewing (gold production of ~3Moz ), Ramone and Gaurdis, and Yandal Resources Limited’s (ASX:YRL) Flushing Meadows gold projects. 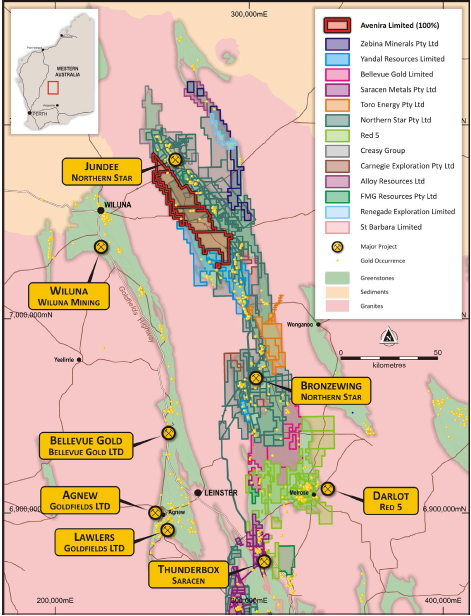 Avenira has adopted a modern approach for the geological interpretation of the substructure. The existing geological models were overly simple and could not be used to identify the controlling structures.

Avenira focussed on the re-interpretation of the aeromagnetic data and the drivers responsible for the gold mineralisation, which was observed in the neighbouring world-class gold mines. This led to the understanding of the complex geological model of the project, along with the associated lithologies and proximal intrusive activities.

Apart from analysing the historical RAB drill data, Avenira launched an aircore drilling program on the project to identify the gold targets.

Avenira has successfully concluded the maiden reconnaissance drilling campaign on the project. The objective of the program was to drill test the Priority 1 and Priority 2 targets identified after the analysis of historical drill data.

A total of 259 aircore holes were drilled during the December 2020 quarter. The drill intercept identified two potential gold trends on the project. The drill samples returned excellent gold values, boosting the confidence in the project. 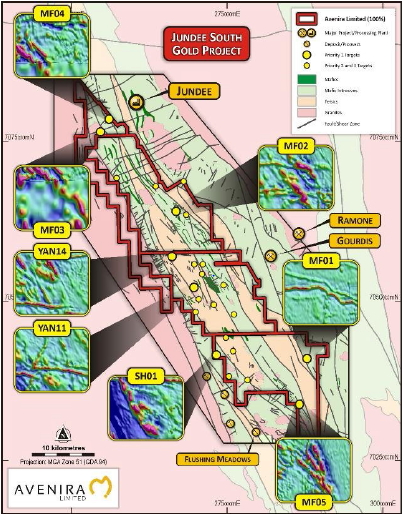 Two of the Priority 1 targets- MF02 and YaN11 have returned excellent results on drilling. The target MF02 has a potential mineralised strike of +700m. High-grade intercepts were also received from the targets. Avenira has planned follow-up RC drilling program to further test the targets MF02 and YaN11 during the second quarter of 2021.

The major mines in the region bear gold mineralisation in dolerite and ultramafics. The structural features of those mines share common features with the MF02 target. 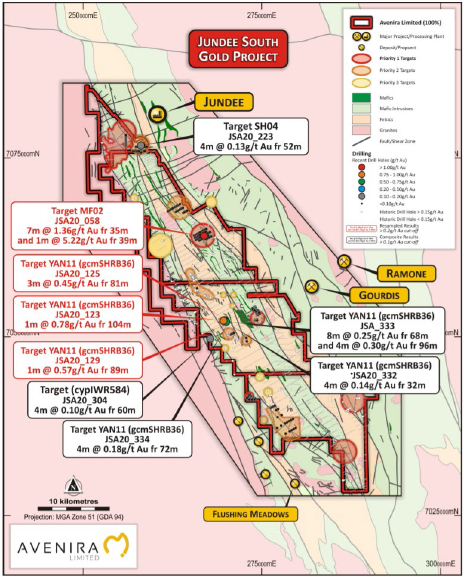 Phosphate is a vital ingredient of fertilisers and is used extensively to increase agricultural yield. With the growing population and limited land for agriculture, the crop yield needs to be enhanced, which would in turn boost the market for fertilisers in the years to come.

Avenira operates the Wonarah phosphate project in the Northern Territory of the country. Avenira has secured the exclusive right to the licence to use Novaphos technology in Australia for the production of phosphoric acid from phosphate.

Wonarah project has a Mineral Resource Estimate of 549.5 Mt and is considered one of the largest phosphate projects in Australia.

Avenira has commenced the scoping study on the project for the Concentrate and MAP/DAP Processing project.