In an upbeat market update, Namibia-focused explorer Arcadia Minerals Ltd (ASX:AM7) has announced the commencement of exploration activities at its advanced Swanson Tantalum exploration project and the Karibib Copper-Gold Project.

Namibia considers mining and exploration as essential services, hence, Arcadia has already commenced its operations in the country despite the COVID-19 restrictions.

The drilling contractors have already been mobilised to commence the drilling activities at the Swanson Tantalum project. Spes Bona Engineering, Drilling and Exploration (Spes Bona), a Namibia-based exploration services company, has been involved and has mobilised its field teams and two diamond drill rigs to ORP’s Swanson project site.

The discovery was then confirmed by channel sampling and subsequently by the initial drilling program, which included 23 diamond drilling holes for a total of 349.85m.

Additionally, a bulk sampling program will also be conducted by Spes Bona to extract 100 tons of pegmatite mineral. The test work is aimed at testing the amenability of pegmatite material to procure tantalum concentrates.

Snowden’s Mining Industry Consultants (Pty) Ltd has been involved for mineral resource estimation and mine design at the Swanson project. The results are anticipated to be released shortly. 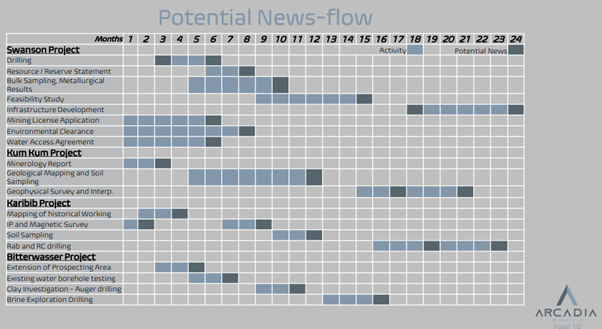 A grab sample program has been undertaken at Karibib over a northeast-southwest trending, 1 to 2.5 km wide and 20 km long structural feature discovered on the Goas license in the Karibib Gold Belt. The structural feature contains known mineralisation and historical base and precious metal geochemical anomalies with grade up to 3.15 wt. % Cu, 36.4 g/t Ag, 1.79 g/t Au and 1.05 % WO3 in the south-east, 4.10 % Cu, 252 g/t Au, 0.80 g/t Au and 0.21 % WO3 in the northwest in a calc-silicate unit.

The sampling program will test if the mineralisation extends across the entire structural feature and will determine the dominating mineralisation style over the feature.

Must Read: Will Arcadia Minerals (ASX:AM7) be the next big lithium explorer from Namibia?