Shares of Guernsey-based Arcadia Minerals Limited (ASX:AM7) surged more than 5% to trade at AU$0.22 a share during the early trading session on 1 December 2021 after announcing the commencement of a drilling program at the Bitterwasser Lithium Clays Project.

The diversified minerals exploration company targets to define JORC-compliant mineral resources at the lithium project in Namibia. Currently, the Bitterwasser project holds an JORC complaint mineral resource of 15.1 million tonnes with grades of 828 ppm Li and 1.79% K. The inferred mineral resource was estimated at a cut-off grade of 680ppm Li.

The estimated mineral resource at the lithium clays project is hosted within one of the seven pans and represents just 6% of the exposed clay pan surfaces, therefore highlighting the significant potential for future exploration. It is noteworthy that the lithium clay project is a part of the greater Bitterwasser Lithium-in-Brines and Clays prospect with substantial potential for lithium discovery. 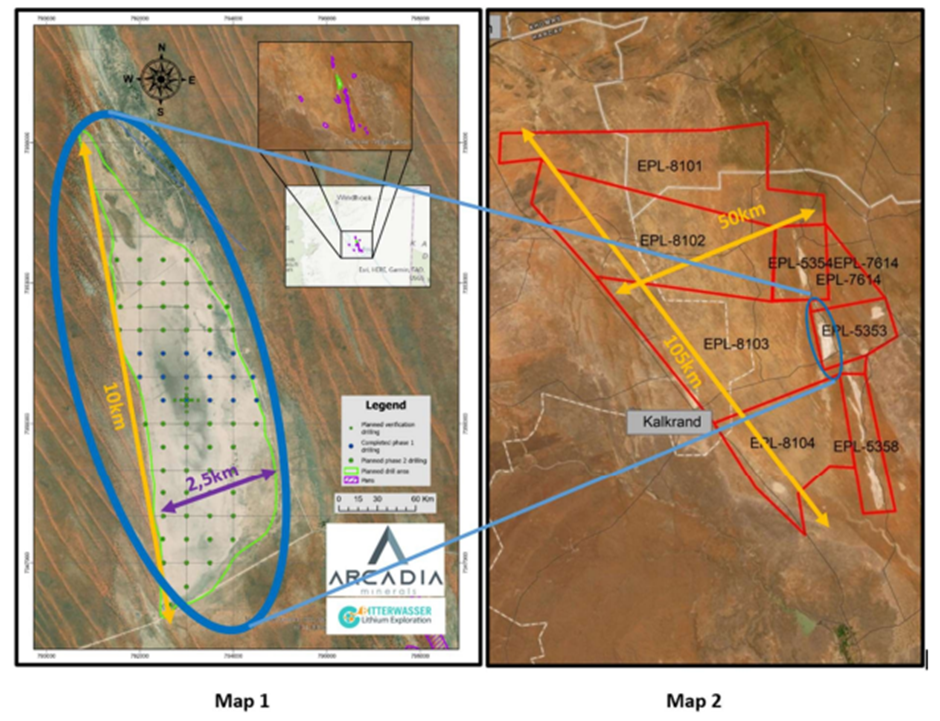 The drilling program targets to expand the existing mineral resource base at the lithium project which stretches over ~593km2. Outcomes of the scout drilling will be beneficial for planning the proposed drilling activity at the remaining six pans next year. Overall, Arcadia holds a significant ground footing stretching over 4,031km2 at the project.

The Kalkrand Half-Graben geological feature exhibits first-order requirements to qualify as the next world’s trending district-scale Lithium province similar to Clayton Valley in Nevada, the US.

Arcadia envisions aggressively pursuing the development of the Swanson Tantalum project for rapid cash and value generation. The company pursues a three-pillar exploration strategy to –

The follow-up auger drill program at the lithium clays project will comprise of 52 holes and 12 boreholes. The initial drilling will assist in geostatistical analysis and is anticipated to be completed by January 2022.

The expenses of upcoming work programs will be funded by LexRox Management Services, a South African company owned by executive directors of Arcadia, then upon AM7’s shareholders approving the acquisition, the funds from the work program estimated around AU$50,000 are to be reimbursed to LexRox. The shareholder’s approval must be secured as per the ASX Listing Rule 11.1.2.

So far, only 26% of the main pan has been drilled. The drilling program plans to test extensions of the current JORC complaint mineral resources at one of the seven exposed pans. A 300kg bulk sample will be collected during the program and will be shared with European speciality and minerals player, Anzaplan (Dorfner Group), to undertake the mineralogy and metallurgical analysis on the clays at the Bitterwasser project. The metallurgical study will be used to extract lithium from clays using the proprietary extraction process.