The Company’s proprietary SiLeach® process, which allows low-energy recovery of lithium from micas, could prove to be a potential shortcut in producing lithium-ion batteries.

In February this year, the Company was granted a US patent for SiLeach®, which enjoys 17 years of legal protection in the US.

A snapshot of the robust SiLeach® process

Designed specifically for lithium mica minerals, SiLeach® is a fluorine-assisted, acid-leach recovery process. It should be noted that the SiLeach® process eliminates much of the evaporation requirement.

SiLeach® holds merit over other competing processes, especially regarding lithium recovery from low-tenor solutions. It not only minimises the capital cost of evaporators but also cuts down the high-energy costs associated with evaporation. In addition, lithium is directly precipitated as a phosphate followed by subsequent refining, providing the potential for direct feed into producing lithium ferro phosphate (LFP) cathode powders. 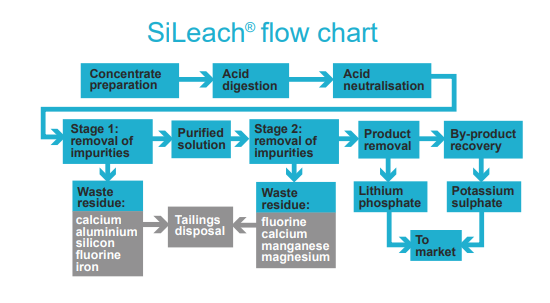 The Company’s lithium extraction technologies are focused on low-grade and waste materials such as lithium micas, fine spodumene, and spent lithium-ion batteries (LIBs). The technologies aim to provide the LIB industry with efficient and sustainable options for processing as well as production while minimising the industry’s environmental footprint.

Lithium Australia has submitted patent applications for most of the technologies stemming from its R&D programs, including:

The World Intellectual Property Organisation has published the second-generation SiLeach® patent application under the Patent Cooperation Treaty, with a priority date of 30 May 2018.

Moreover, the International Searching Authority has provided a written opinion on the application’s patentability, confirming the novelty and inventiveness of the claims. The patent application (PCT/AU2019/050541) has been lodged in the US, Australia, Chile, Europe, Brazil, and Canada.

Through its 100%-owned subsidiary VSPC Ltd, the Company has produced LFP cathode powder from tri-lithium phosphate, which was in turn generated via the SiLeach® process. Lithium phosphate production is a common thread in LIT’s proprietary extraction technologies and an essential ingredient for producing LFP cathode powder. Subsequently, battery cells were manufactured using the LFP as part of testing, which generated positive results. 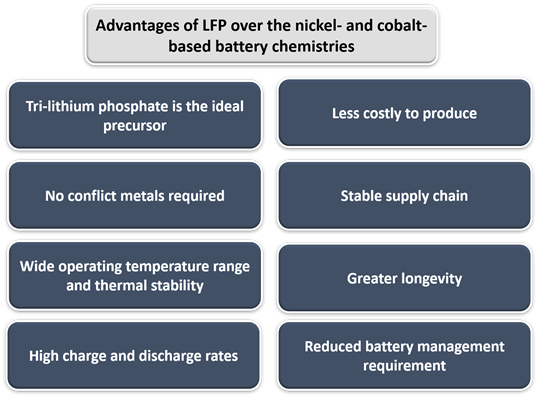 Furthermore, there have been significant market trends favouring LFP including:

Meanwhile, the shifts in legislation in Europe, China and North America would necessitate fire protection for EVs using nickel-based battery packs. It is also anticipated to expedite a shift to LFP, which is considered as the ‘safe’ LIB.