The rock chip samples and 2mm sand were assayed for gold using 50g fire assay. For other elements, Inductively Couple Plasma Atomic Emission Spectrometry (ICP-AES) testing was used to detect the presence of over 35 elements. Gold anomaly at Charters Towers is associated with elevated levels of lead and zinc, low levels of arsenic and lesser levels of elevated copper. 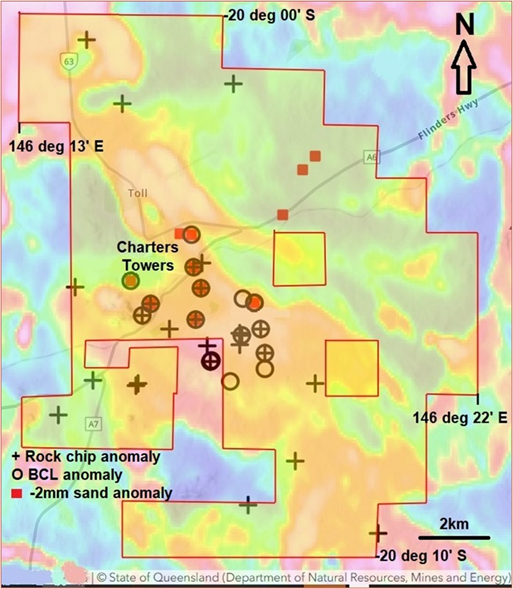 Results from the Sampling Program

The log probability plots were used for statistical analysis of the samples. The samples were considered anomalous for BCL gold grades over 100ppb, above 0.1g/t gold in the 50g fire assay tests, ICP-AES copper, lead and zinc levels over 100 ppm and arsenic values over 20 ppm.

The rock float samples from 82 sites were sent to a lab for geochemical testing. Out of these 82 samples, 19 were below detection level. At least 29 samples were recorded with grades over 0.1g/t gold and considered anomalous. Over 16 samples yielded more than 0.5g/t gold grades, and 8 samples returned assay with 1 g/t gold or higher.

Potential for new undiscovered mineralised bodies: Three anomalous samples from the northern edge of the exploration permit returned gold values of 0.59, 0.51 and 0.83 g/t gold. The samples were collected from 5-8 km north of the centre of the Charters Towers.

The findings of the anomalous sample are significant as the historical workings at Charters Towers were not considered to extend to north of the city. The area was earlier not known for gold mineralisation, however the latest findings indicate a potential for gold footprint in the tenement area itself. 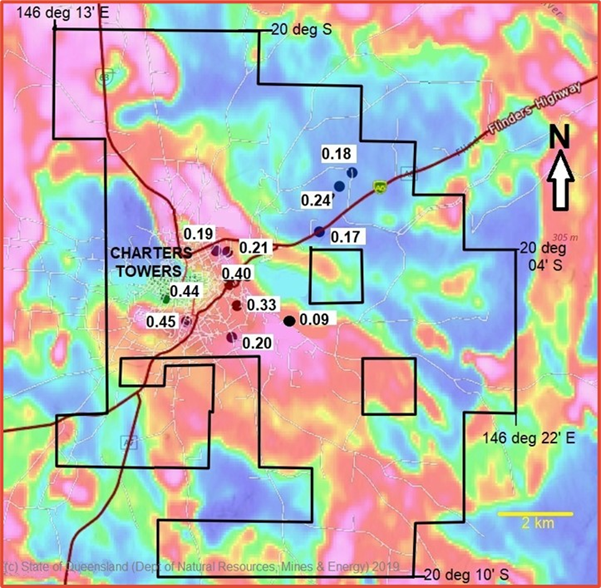 Silver and base metals signature matching to VMS mineralisation style: Another significant finding was made on the analysis of rock chip sample no. 74. It showed the presence of base metals and silver. The sample recorded 2.03% zinc, 0.8% lead, 0.07% copper, 29 g/t silver and 10.5 g/t gold grades. The silver and base metals signature matches that of a Volcanogenic Massive Sulphide (VMS) deposit. Such deposits are not known to be present on Charters Towers as the area does not have any known mineralisation. The latest rock samples exhibit a potential for VMS mineralisation within the project area.

Citigold is planning on infill stream sampling to commence after the wet season. The follow-up sampling program in the northern edge of the Charters Towers, along with the new anomalies indicating different trends of mineralisation, will be undertaken in late March- mid-April.