Dual-listed Raiden Resources Limited (ASX:RDN, DAX:YM4) is a copper-gold-nickel focused mineral explorer engaged in the exploration and development of copper, gold and nickel assets across the Western Tethyan Belt of Eastern Europe and the Pilbara region of Australia.

Over the last 4 years Raiden has secured a very large portfolio of exploration projects across the two continents and has conducted extensive targeting work across most of the projects. Recently, the Company increased its stake to 100% on its Pilbara projects, and extensive exploration and drilling campaigns are being planned, both in Australia and in Europe. Raiden is well-positioned to unlock the value of its project portfolio and deliver a significant return to its shareholders.

Premium Projects in the Tier 1 Jurisdictions 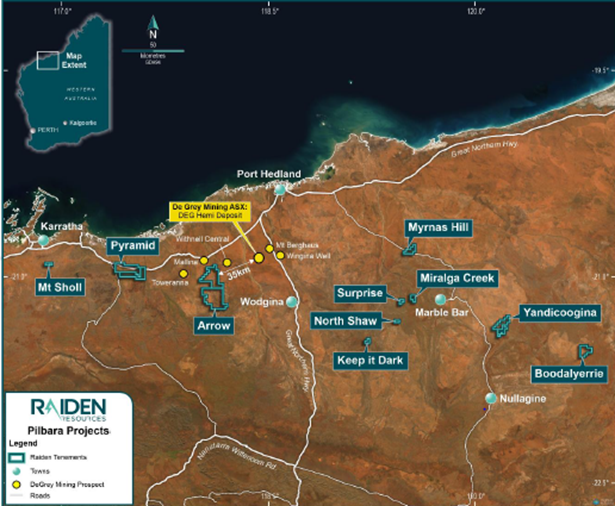 The Arrow Project is located in the Malina Gold Province, a rapidly emerging tier one gold district. The project lies along strike of the De Grey Mining’s (ASX:DEG) Hemi discovery, one of the largest recent discoveries in Australia.

A recent magnetic survey has delineated 40 targets within the northern license alone. The geologic interpretations have confirmed the presence of Mallina formation across the project area. The formation belongs to the De Grey Supergroup, which makes it significant, as this is the same host unit of the Hemi deposit.

The Yandicoogina Project is considered highly prospective for gold mineralisation and lies 30km along strike of the Warrawoona Gold Project of Calidus Resources (ASX:CAI) in the north-west of the tenure.

Raiden has recently undertaken a field mapping and sampling campaign on the tenure with results due over the next few weeks.

The Mt Sholl Project hosts significant potential for Ni-Cu-PGE mineralisation. The geology of the tenement area consists of lopolithic intrusion with upper layered gabbro overlying a basalt ultramafic zone.  Historical drilling has identified a mineralisation zone up to 20m thick above the basalt contact with intercept results up to 27m @ 0.50% Ni, 0.82% Cu, 0.86 g/t Pd from 54m.

Raiden’s geological team is currently reprocessing geophysical data to refine the targeting model using the existing magnetic and electromagnetic surveys. The Company also undertook a field mapping and sampling campaign with results due over the next few weeks.

The Boodalyerrie Project boasts the presence of a multi-kilometre strike in the gold-bearing vein system. The tenure is sparsely explored, and rock chip samples have returned significant gold results up to 39g/t.

Raiden has completed a field reconnaissance program on key prospects on the project area and the results are expected within the coming weeks.

In Europe, Raiden operates numerous projects in Bulgaria and Serbia. Both countries present a favourable regulatory environment along with low-cost development options.

Raiden’s assets lie in the Western Tethyan Belt running through Bulgaria and Serbia. The Tethyan Belt hosts many Tier 1 mineral deposits and is considered to still be highly underexplored in comparison to other major porphyry belts around the world. The Company operates the Vuzel, Kalabak, Zlatusha and BG1 projects in Bulgaria. The Serbian Projects include Majdanpek West, Tolisnica & Stanca, Pirot and Donje Nevlje projects. 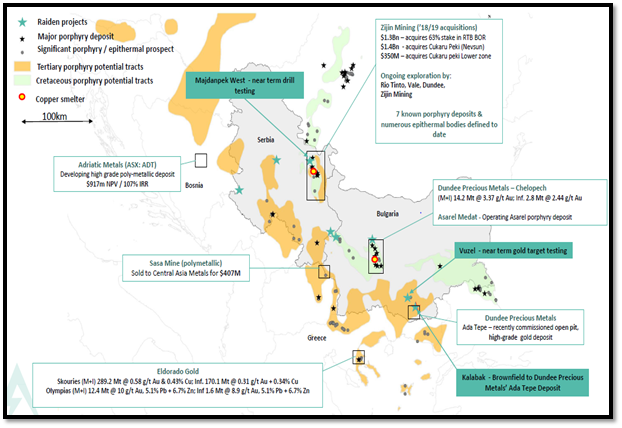 In its market update of 10 May 2021, RDN announced that it had delineated significant potential gold and silver mineralisation on the Vuzel Gold Project. The Company will commence diamond drilling to test the anomalies identified through rock sampling. Raiden will move ahead with a further extensive drilling plan if results from preliminary diamond drilling are encouraging.

In Bulgaria Raiden controls the Zlatusha Project, where Raiden can earn up to a 75% interest. The Company is reviewing available historical data and will commence fieldwork based on the targets identified from historical works, as soon as the final permitting is received on the project.

The BG1 Project hosts a major porphyry-epithermal system which has the potential for significant copper and gold mineralisation. Raiden is waiting on government approvals to commence exploration and drilling operation on this advanced porphyry project.

The Majdanpek West exploration permit is surrounded by several high-grade deposits epithermal deposits like including Coka Marin, large porphyry deposits like the Majdanpek mine and Timok Gold Project (+2Moz). Raiden is completing the targeting work from magnetic and VTEM surveys and will be implementing target drilling campaign in Q3 and Q4 ’21.

The Tolisnica & Stanca exploration permits exhibit significant potential for copper mineralisation. Furthermore, rock samples have yielded cobalt values up to 0.2%. The tenement area has a strike extending over 1.5km and is up to 100m wide. During the Q2/Q3, RDN will begin the Phase 1 targeting operation on the permit followed by Phase 1 drilling program in Q3/Q4 of 2021.

The Donje Nevlje Project is prospective for porphyry, epithermal and skarn mineralisation. IP-chargeability targets were already defined in March 2019 by the Company. During the 1H of 2019, 1,150m of drilling was completed, targeting the porphyry and epithermal mineralisation. An intercept of 9.5m @ 0.16g/t Au and 0.13% Cu was achieved in one of the scouting drill holes and will be followed up in the near term.