Any technology advancement or innovation has been seen moving as per Moore's law, with Electric Vehicles (EV's) not being an exception.

As per IEA, the electric car share is predicted to grow exponentially in a sustainable development scenario. The technology advancement in the battery space has brought the cost per unit of energy stored lower, which has turned EV idea from a conceptual concept to the commercialisation phase.

Having said that, the inevitable, expected demand for the batteries is likely to stir up the requirement of battery metals such as Nickel, Lithium, Cobalt etc. 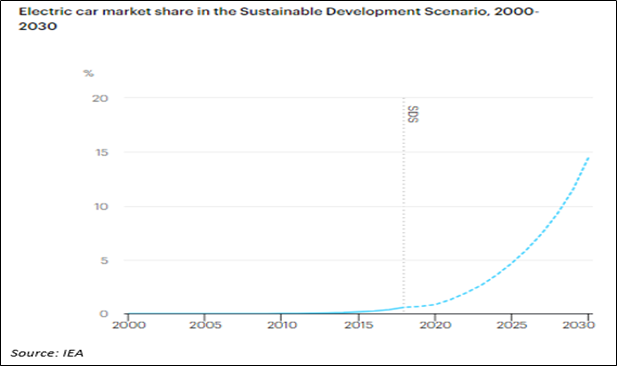 In the milieu of this, it is quintessential to gauge through various stocks related to battery metals and know the recent updates to evaluate the company strategy.

For the same, nine stocks are randomly chosen such as AGY, CLQ, AJM, GXY, BAT, MIN, AVZ, PAN and BSX.

Argosy Minerals Limited (ASX: AGY) is an ASX listed lithium company with its assets in Argentina and USA. The company owns 77.5% (earning up to 90%) of its flagship project Rincon Lithium in Salta Province and 100% of Tonopah Lithium Project in Nevada.

During the Dec quarter, Salta Province approved Environmental Impact Report for Rincon Lithium Project. The budget capex is anticipated to be around US$14.3 million for ~2,000tpa processing plant. The plant is expected to start commercial production in ~1.5 years from the start of construction.

AGY is presently looking for regulatory approval and permit for the extension of processing capacity to ~10,000tpa. Also, ~5 tonne preliminary trial cargo production from pilot plant is likely to schedule for shipment in Q1 2020.

Clean TeQ Holdings Limited (ASX: CLQ) is an Australian company with nickel, cobalt and scandium Sunrise Project along with the proprietorship of continuous ion-exchange processing technology and Clean TeQ Water.

The Sunrise project is one of the cobalt-rich laterite deposits in the globe and contains the critical products necessary for EV’s battery cathode material. Presently, CLQ is teamed up with Fluor Australia Pty Ltd to project execution plan and future implementation approach for Engineering, Procurement and Construction Management (EPCM) which is likely to be concluded by 2Q 2020.

Further, to proceed ahead with commercialisation, Clean TeQ appointed Macquarie Capital to help with partnering process for long-term offtake arrangements via investment in the project of up to 50%. The company is aiming to conclude the partnering process in 1H2020 along with the planned final investment decision subject to the completion of the financing package.

Altura Mining Limited (ASX: AJM) is a lithium producing company. It owns and operates a world-class Altura Lithium project which commenced production in 2018 with a capacity of 220,000tpa of quality spodumene concentrate.

During the latest quarter, ore processed reduced by 8% from the previous quarter to 345,553wmt. However, Lithium concentrate production increased by 4% to 47,181wmt due to the improvement of 8% in the mined grade of Li20 from 1.18% to 1.27% in the same period.

Galaxy Resources Limited (ASX: GXY) is an ASX listed global lithium company with the projects such as Sal de Vida in Argentina, James Bay in Canada and Mt Cattlin in Western Australia.

During the December quarter, Mt Cattlin produced ~43,222dmt of lithium concentrate at 6.0% Li2O grade with a cash cost of US$406/dmt.

The company is planing to reduce mining and production rate in 2020 for conserving the resources for the better market conditions in future. For the same, GXY planned to recommence drill and blast in February followed by mining in March 2020. The company expects that the move to prioritise value over volume by conserving resource life may help in maintaining positive free cash flow and sustain balance sheet for the development of GXY portfolio.

Battery Minerals Ltd (ASX: BAT) is a diversified mining exploration and development company with a prime focus in Mozambique. It has two graphite assets, namely Montepuez and Balama project.

The company is presently advancing toward Montepuez funding strategy. For the same Thirdway Africa – a financial advisor of the BAT has secured interest from prospective investors and are currently at varying stages of project and market due diligence.

The BAT expects the initial production at 50,000tpa with ramp-up plans to 200,000tpa over the next five years.

Mineral Resources Limited (ASX: MIN) is an Australian based mining company with its focus on mining services, commodity, innovation and infrastructure. MIN has presence across Western Australia and Northern Territory in providing mining services to the client.

During 1H20, the company produced 124,000wmt of spodumene concentrate from Mt Marion Lithium operation and ~ 31,000wmt from Wodgina Lithium Project in the construction phase.

MIN recently transacted 60% of Wodgina project to Albemarle. It established the MARBL Lithium Joint Venture (MARBL JV) and on mutual direction put the JV on hold until the market is favourable.

The guidance is likely to remain the same as the previous period and expected to export 170-190Kt in next 2H20.

The company is aiming to complete the Feasibility Study by Q12020 followed by construction in Q42020 and commissioning anticipated by Q42021.

In December quarter, Savannah Project produced around 1,042t of Nickle, 695t of Copper and 55t of cobalt at a cash cost of A$12.05/lb (Ni). The nickel mined grade was down by 21%, but is expected to increase in the next half-year, i.e. 2H2020 due to the production ramp-up and access of higher-grade ore at Savannah North ore body.

Ta Khoa Nickel PGE has advantage of infrastructure from the existing Ban Phuc mine facilities including processing, labour force and low-cost underutilised hydro-electricity. Ban Phuc is one out of 25 Ni sulfide prospects in the highly potential Ta Khoa Nickel PGE (Cu Co) district.