Why Are These Stocks Considered As Key Opportunities On ASX - OSH, TWE, WBC

In the past six months, the S&P ASX 200 Index soared around 18% amidst certain challenges in the market. OSH and TWE have reported higher net margins of 22.2% and 14.3% as compared to the industry median of 13.9% and 12.2%, respectively. In addition, WBC also reported higher net interest margin of 2.12% against the industry median of 1.95% .Let’s have a look at three stocks OSH, TWE, WBC, which have witnessed positive returns for the six month period.

Oil Search Limited (ASX: OSH) operates in the development, production and exploration of oil and gas resources. Oil Research Limited was officially listed on ASX in 1974. Recently, the company updated the market that it has received Record of Decision and United States Army Corps of Engineers Permit for the Pikka Development Project on Alaska’s North Slope.

The company in another announcement informed investors about the Change of Director’s Interest and new issuance of securities. One of the company Directors, Mr Peter Botten, has changed his holding by disposing of 326,900 performance rights. The number of securities held after the change was 1,107,884 as compared to 1,434,784 before the change and the change of interest was executed on 20th May 2019. Additionally, OSH issued 1,115,793 ordinary securities at a consideration of $7.60 in order to satisfy obligations under the company’s executive and employee equity plans.

Looking at the tale of two halves. FY2018 production of 25.2 mmboe witnessed a decline of 17% against FY2017, due to the temporary shutdown of operations after the earthquake in Feb 2018. In addition, this was the highest half year rate achieved since the project start-up in 2014. The company inked three new mid-term contracts with BP, Unipec and PetroChina, taking the total PNG LNG contacted volumes to around 7.9 MTPA, which is approximately 90% of the total production. The company’s three major projects; Papua LNG based on Elk-Antelope field, PNG LNG and Pikka Unit Nanushuk field in Alaska are driving high value production growth. 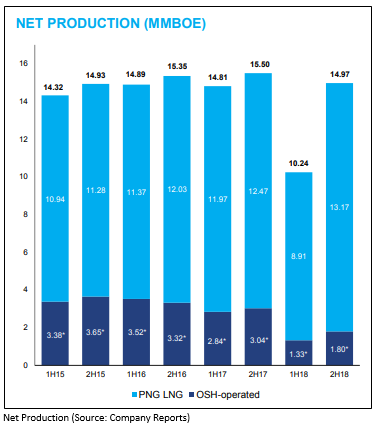 The net margin of the company amounted to 22.2% in FY18 when compared to the industry median of 13.9%. This implies that the company is effectively converting its top line into the bottom line against the broader industry. The gross margin for the period stood at 54.5% against the industry median of 44.3%. The return on equity was 6.8% in FY18, reflecting a growth of 0.5%, which represents that the company is providing better returns to its shareholders.

A consumer staples sector company, Treasury Wine Estates Limited (ASX: TWE) produces high quality international wines along with the portfolio of luxury, premium and commercial wines. It was officially listed on ASX in 2011. The company recently announced that one of the company Directors, namely Colleen Jay, has changed his holding in the company by acquiring 605 shares at a consideration of $15.46 per ordinary share. The number of securities held after change amounted to 2,862 ordinary shares.

The major factors impacting the movement in non-current inventory were (1) A significant increase in yields and grade conversion rates relative to the prior year, driving an uplift to Luxury and Masstige wine production in Australia and California, (2) Intake of high quality, high volume 2018 vintages from California and Australia. Additionally, the total luxury inventory stood at $1,172.1 million in 1H FY19, reflecting a rise of 22%. In 1H FY19, the cash conversion was 53.5%, primarily reflecting revenue growth, unfavourable foreign currency translation of US working capital balances and the timing of sales execution in the Americas and Asia. 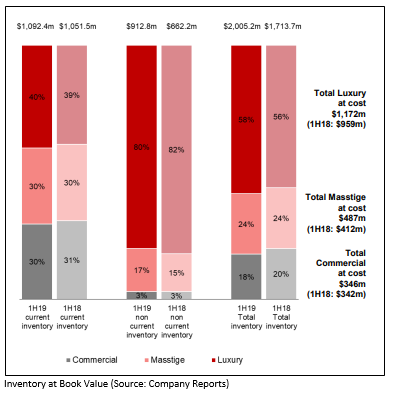 Treasury Wines Estates Limited expects cash conversion to be in the range of 60% to 70% for FY19, and over the longer term, 80% of the cash conversion target of remains appropriate. It anticipates capital expenditure for maintenance and replacement to be in the range of $130 million to $140 million for FY19. The company has the business models, the people and the brand in order to maintain its strong position in all of its markets.

A financial sector company, Westpac Banking Corporation (ASX: WBC) is involved in providing banking and financial services such as lending, deposit taking, etc. It was officially listed on ASX in 1970. Recently, the bank has provided an overview of its self-funding instalments (SFIs).

SFIs are the financial products offering interest to the market players in ASX-listed securities without paying the full price for the security upfront. SFI provides a beneficial interest in an Underlying Security, which is held on trust for investors by the security trustee along with a limited resource loan from the company.

The bank in the disclosure statement reported four ways to acquire SFIs; first being Cash Application, in this method, the investor makes the first payment in cash; second being Securityholder Application, wherein the transfer of securities takes place between the investor who already holds it and security trustee; third being the Rollover Application, where the investor rolls existing Westpac SFIs into a new Series of Westpac SFIs over the same Underlying Security; and the fourth being the Purchase on-market, where an investor purchases the SFIs on the ASX during their term.

Recently, in another announcement, the bank via a release dated 19th June 2019 reported the appointment of Guilherme Lima as a Chief Executive of its new business division.

Westpac Banking reported that the consumer bank net profit after tax ex-notable items have witnessed a decline of $178 million on the back of increased operating expenses and a fall in net interest income. In addition, there was a decline of 6% or $65 million in Business Bank NPAT, while excluding notable items, NPAT increased $66 million, primarily because of a reduction in the impairment charges and higher net interest income.

BT Financial Group Australia, wealth management and insurance arm of the company, reported a net loss after tax of $310 million in IH FY19 against NPAT of $406 million. Excluding notable items, NPAT for the period stood at $620 million, NPAT decreased $96 million or 24%, mainly driven by higher weather-related insurance claims and lower revenue related to the ceasing of grandfathered commission payments and platforms repricing. On the flip side, Westpac New Zealand witnessed a rise of $69 million or 4% in net profit after tax on the back of the sale of Paymark and a reduction in impairment charges.

The group businesses have delivered $106 million net loss after tax in 1H FY19 compared to pcp’s NPAT of $16 million, a decline of $122 million, primarily because of lower treasury revenue, partly offset by an impairment benefit 1H FY19 when compared to an impairment charge in 1H FY18 and a fall in expenses. 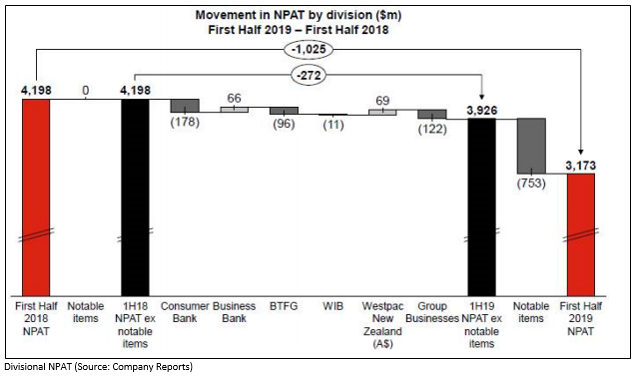 The net interest margin for the company amounted to 2.12% in 1H FY19 against the industry median of 1.95%. This implies that the company is well-positioned from a margin perspective.