The below-mentioned stocks have come up with significant updates today, pulling the prices up on ASX. Let’s take a closer look at each of them.

The tax incentive refund is mainly for R&D activities related to the oyster nursery operations undertaken during the year ended 30th June 2018. The company has assured that it is maintaining its focus on innovation and R&D to position itself as a leader in the oyster industry. The company has also undertaken additional qualifying R&D activities during the current financial year (FY19).

Furthermore, the company also received approval for a $350,000 asset finance facility under a Hire purchase agreement with the NAB (National Australia Bank) for its newest and recently commissioned big vessel, Angel VI. The company will repay the Hire Purchase facility in 60 equal monthly instalments of $6,480.

In an operational update provided on 21st June 2019, the company has assured that its operations are progressing well for Q$ FY19, with record quarterly sales and positive operating cash flows are expected to be achieved. Moreover, the company has confirmed that its stock levels are at near capacity levels with more than 20 million healthy oysters in the water, positioning Angel for further growth in sales heading into FY20.

In the last one year, the company has witnessed substantial growth in its operations, sales and total assets.

The company achieved 120% growth in sales to Q3 YTD, with sufficient stock for additional growth for the full year. The company is currently focused on optimising oyster production to maximise sales with a relatively fixed cost base.

In the first half of FY19, the company achieved sales of $2.48 million, up 184% over the previous corresponding period.

In the half year period, the company achieved a normalised EBITDA of $271,545. The company believes that it is on track to be operationally cash flow positive for the 2019 financial year.

The stock of Roots Sustainable Agricultural Technologies Ltd (ASX: ROO) skyrocketed 30% during today’s trading session. The company today announced that it has delivered another Root Zone Temperature Optimisation (RZTO) sale in North America for a total value of $43,450 (US$30,000). As per the release, organic producer, PRO will pay $43,450 to ROO for installing Roots’ proprietary RZTO cooling and heating technology in growbags and pots within hoop houses of varying sizes. This marks the company’s fourth sale in North America since March and is a testament to the company’s success in that region. The company’s CEO has assured that the company is keeping a close eye on increasing sales activity in North America, capitalising on the trend for outdoor and hoop house crop cultivation.

Through its disruptive, modular, cutting-edge technologies, ROO has established itself as a significant player in the Agricultural Technologies space. Since listing on ASX in 2017, the company has initiated sales in three additional territories in addition to Israel, those being China, the USA and South Korea. In two other jurisdictions Spain and Australia, the company installed "first deployments" of its root zone cooling and heating systems. Orders for heating and cooling systems in 2018 (the first year in which these sales were made) totalled $471,000 and total orders from 1st January 2019 until the date of this Prospectus (17 June 2019) totalled $528,000.

Recently, the company invited its shareholders to participate in a pro-rata non-renounceable entitlement issue of One option for every two CDIs at an issue price of $0.04 per option to raise up to approximately $1,700,752. 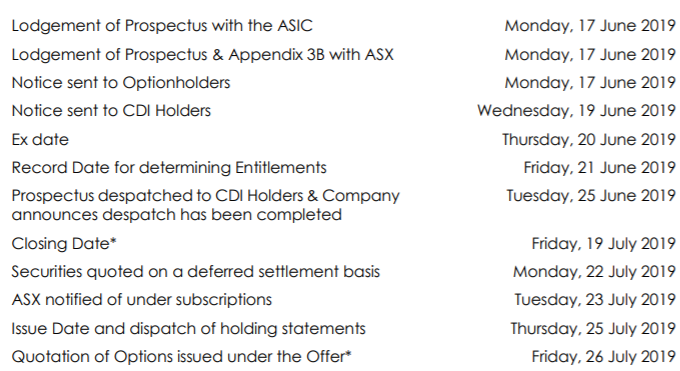 The funds raised from the offer will be used to expand the company’s cannabis growers marketing and sales activity in North America as well as to broaden the company’s sales in China and South Korea. Further, the funds will also be used towards the development of the company’s Spanish and Australian markets and towards upgrading the system components, including smart pipes, coils, communications and agronomic field test and monitoring as well as working capital.