The Revelation of Recent Results - SHL, AHY, VRT and EHE; Would you invest in these stocks?

The reporting season dawned upon ASX-listed companies, a couple of weeks ago and continues to be an attractive stance for market enthusiasts and investors. To ease the understanding and aid investors to custom choose from the basket of stock options, we would discuss four companies in this article, that are related to healthcare and consumer staples sectors and have dropped in their earnings release on 20 August 2019.

Before acquainting ourselves with the results, it is important to understand the businesses of these companies. We would also glance through their stock performances and returns towards the end of the article: 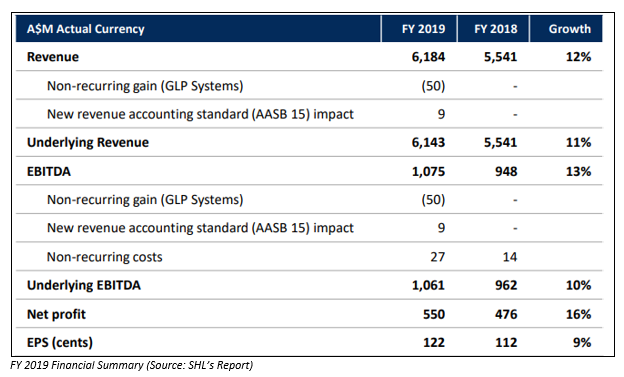 The highlight of the quarter was the Strategic acquisition of Aurora Diagnostics and Strategic divestment of non-core GLP Systems, which were accomplished during January and June this year, respectively.

On the outlook front, SHL stated that it expects an EBITDA growth of 6-8% on underlying FY19 EBITDA of A$1,052 million. The interest expense would be up by ~3% and Effective tax rate would be ~25%. The Capital expenditure is likely to be significantly lower in FY20.

Commenting on the robust results, SHL’s CEO, Dr Colin Goldschmidt stated that the company has successfully and strategically undertaken major steps forward, opening up new pathways for future growth, like expansion in the anatomical pathology markets in the USA and Germany via the Aurora acquisition, formation of a hospital laboratory JV with ProMedica Health System, Inc, winning the cervical screening contract.

The HY19 Results, declared on 20 August 2019, was in line with the company’s expectations, and Asaleo Care Limited (ASX: AHY) recorded an underlying EBITDA of $39.4 million, down by 8% on pcp. The Statutory NPAT was $7.3 million, slashed by 107% on pcp. The Y-O-Y revenue growth driven by the Retail segment while the B2B remained flat. The Gross margins were heavily challenged by higher pulp costs, increased investment in trade activity, but were partly offset with lease accounting change. For the period, the company declared no interim dividend. 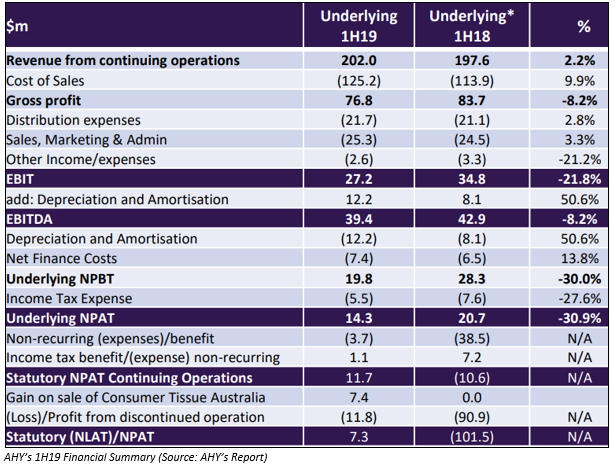 The highlight of the half-year was the completion of the sale of the Consumer Tissue Australia business, sale proceeds of which were utilised to pay back debt, to enhance the balance sheet and invest in higher margin, higher growth brands.

The company launched its latest Libra marketing campaign, Blood Normal, last week, which focusses on breaking down taboos, reduce the stigma and shame pertaining to periods, and boost discussion. The TENA Discreet campaign had already been initiated with more marketing activity planned for the second half of the year. A blessing for AHY, Sweden’s Essity, its major shareholder, reaffirmed its long-term commitment via a new agreement which extends the Trade Mark and Technology License Agreement to 2027.

On the outlook front, AHY expects the Continuing Operations Underlying EBITDA forecast to range between $80 - $85 million.

In its FY19 results published on 20 August 2019, Virtus Health Limited (ASX: VRT) achieved cycle and revenue growth, even though it had to incur additional costs relating to technology, people and infrastructure investment. The performance was slower than expected, with Revenue up by 6.1% on pcp to A$280.1 million. The EBITDA was down by 2.3% to A$63.5 million, wherein the IP commercialisation delivered $4.1 million of the EBITDA. The revenue mix change impacted the EBITDA margins in Australia. VRT’s International operations grew by 25.2% to reach 21% of the total Group revenue.

For the period ended 30 June 2019, the company announced fully franked dividend of AU 12 cps, which would be paid to shareholders on 25 October 2019. It has an ex date of 3 October this year, followed by the record date of 4 October this year.

The highlight of the period were VRT’s achievements of Relocation of IVF Australia East (Maroubra), TasIVF lab and clinic to new facilities and the rollout of the AI ‘Ivy’ technology. Sale of AI ‘Ivy’ technology and collaboration agreements were made with Vitrolife and Harrison AI to further develop ‘Ivy’. During the year, VRT commissioned new Virtus Diagnostics’ main Laboratory to enhance scope of tests and capacity for volume growth. Moreover, the Alexandria Specialist Day Hospital NSW and Hobart Specialist Day Hospital TAS were commissioned.

The company was able to maintain its fully franked full year dividend at 15.8 cps, after declaring a final dividend of AU 7.8 cps, which would be paid to the shareholders on 2 October 2019. It would go ex on 4 September and has a record date of 5 September 2019. The re-activated DRP would apply to the final dividend. 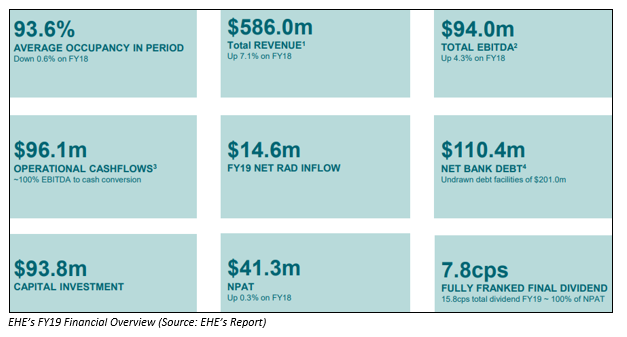 For the year, EHE had a Net bank debt of $110.4 million with $201.0 million in undrawn facilities from a total of $330.0 million debt facilities. The gearing ratio was 1.3x EBITDA. An amount of $93.8 million was utilised as Capital investment to expand and enhance the company’s home portfolio, which was the highest level of capital investment since listing in 2014. Despite the occupancy declines in the sector, EHE delivered an average occupancy of 93.6% during the year. The Net RAD inflows were $14.6 million in the year, with a RAD balance of $805.0 million, recorded as at 30 June 2019.

A highlight of the result was the Contract which had been executed to acquire 108 licences and a new greenfield site in the Maitland area, which was subject to the closing terms and expected to be completed by 31 December 2019.

Adhering to the Aged Care Quality Standards of the Royal Commission, EHE is well prepared for the introduction of the new quality standards, as stated by CEO Mr Ian Thorley. The company strongly supports the recommendations made to the Commission in the Aged Care Financing Authority.

On the recent outlook front, the company is in line to have 42 of 69 homes qualifying for the Higher Accommodation Supplement by September 2019.

Now that we have gone through the respective earnings, highlights and outlooks of the companies under discussion, it would be interesting to have an idea of their present stock performance (as on 21 August 2019, AEST 11:44 AM) and returns that have been generated on ASX. The table under summarises the same: