The supermarket giant reported the sales figures for Australian Food at $12,033 million for the period, up by 12.9 per cent against the previous corresponding period (pcp). Majority of the global business segments witnessed an increase in sales, except for the hotels segment which registered a decline of 33.2 per cent against pcp.

Also Read: Record Supermarket Sales Give Woolworths Confidence to Walk Out of $4 billion

Woolworths Supermarkets witnessed sales growth of ~ 13.42 per cent during the period, leading to total growth of 12.9 per cent in the Australian Food segment.

Australian Food’s VOC NPS (Store and Online) surged by a unit point against pcp at 50; however, remained three points down against the previous quarter. 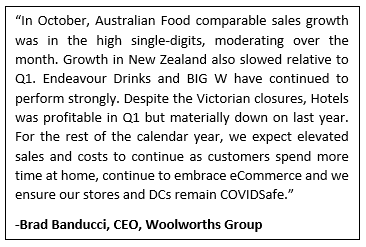 WOW suggested that sales were primarily supported by COVID-driven higher in-home consumption as well as the success of Disney+Ooshies. Sales in Victoria marked an increase of ~ 20 per cent, owing to the extended and more stringent restrictions in place.

Meanwhile, sales for Metro Food Stores declined by 5.1 per cent to $235 million.

At the end of the quarter, total store fleet reached 1,057 with 992 Supermarkets and 65 Metro Food Stores.