When it comes to the Australian technology space, Zip Co Limited (ASX:Z1P) is one name which cannot go unnoticed. The arch rival of Afterpay Limited (ASX:APT), Zip has made its own mark in the BNPL space. The ZIP share price has had a great start to the year. The stock closed 2020 at AU$5.29, ending the last quarter in a downtrend. However, as soon as the year ended, the stock broke its downtrend line on the daily chart and started to rally, eventually hitting all-time highs.

As can be seen from the chart below, the Z1P share price rose from around AU$5.5 and ran all the way to AU$14.53 till mid-February, delivering a massive return of 164%.

Around that time, the world was starting to get over the pandemic woes as vaccination drives had been kicked off and governments had begun to ease the pandemic-induced restrictions. As investors worried that demand for these fintech companies would revert back, the selling started to kick in.

The mid-February high of AU$14.53 proved to be a major peak and soon the ZIP share price tanked 50% by March end.

Read More: Zip shares up as it raises over $56 million capital

In the midst of the falling share prices, Zip Co came out with outstanding Q3 FY21 numbers. The company posted a record quarterly revenue of $114.4 million, up 80% YoY, and saw its transaction value more than double to $1.6 billion in the same period.

Zip US (Quadpay) had a standout performance, delivering significant growth in what is typically a seasonally quieter trading period. Quadpay achieved record results across all core metrics - $762 million in transaction volume (up 234% YoY), $54.4 million in revenue (up 188% YoY) with 674k new customers joining the platform (up 153% YoY to 3.8 million customers).

Around the same time the company announced that it is partnering with JB Hi-Fi Limited to provide a fully integrated payments solution to JB Hi-Fi.

The financial performance coupled with the new partnership with one of Australia’s largest technology, entertainment and home entertainment retailers was sufficient for investors to start “buying the dip”. As can be seen from the chart above, after the March dip, the Z1P share price rallied almost 46% in about two weeks.

However, by mid-May, this short-term rally didn’t seem to hold its ground and fizzled out, making a new low for the year at AU$6.32. So far, this seems to have been the lowest price sellers were willing to sell for. Since this dip the stock has again started to catch the market’s attention as investors are still finding technology shares to have a decent growth prospects.

Zip vs Afterpay: Which one is more attractive?

Both Zip and Afterpay’s share prices have broadly moved in the same trend, being the two dominant players of the same sector, it is a no-brainer. However, while looking at the comparative analysis of both the stocks, it seems investors have preferred Z1P by a fair margin over its competitor, Apterpay. 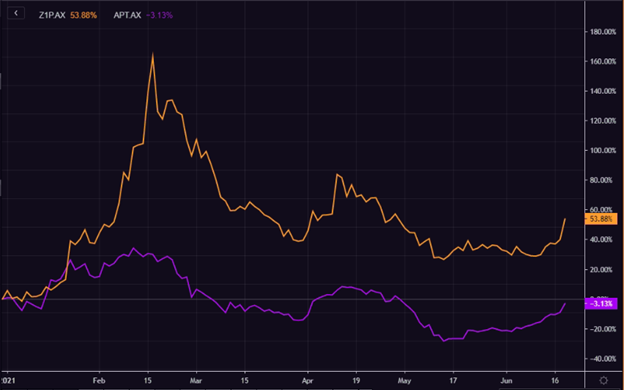 The chart above depicts the total return of Z1P (Yellow) and APT (Purple) on a year-to-date basis. As the chart shows, almost from the beginning of the year, Z1P started to outperform APT with its meteoric rise.

By the time Z1P shares were up over 164% this year, the APT share price had barely given a 30% return. Another thing to notice,  Z1P never slipped in the negative territory and stayed net positive throughout the year.

However, this is not the case with the APT share price which had gone underwater multiple times and is still trading in negative for the year.

By looking at the above comparison it becomes clear that Z1P has been the preferred choice among investors since the beginning of the year. Although, the Z1P share price had lost investors’ interest after a 164% rally, it is still up 53.8% on a YTD basis as investors are still capitalising on dips.