We are already one and a half years into COVID-19 pandemic. Any pandemic, like an economic cycle, is denoted by a curve-shaped graph and has similar peaks and bottoms. Different parts of the world might see peaks at different stages, but the trend remains similar.

The world witnessed its first COVID-19 peak in 2020. Some parts of Europe saw the second peak as well that year. In 2021, India and the US – the world’s second and third most populous countries – saw their peaks between January and May 2021. After the second wave subsided, a fresh spike in COVID-19 cases has begun to baffle the world – in what is being labelled as the third wave, however, the peak is for experts to decide. For now, cases continue to grow unabated.

While it may have spooked investors at Wall Street, the one sector for which the pandemic has reserved its harshest blow is – travel. For the entire period of the pandemic, the travel space has remained almost frozen. Businesses prefer zoom meetings, family functions are truncated, and the vacations are being avoided by one and all. Except for extreme health or other unavoidable purposes, people prefer not to travel. This has had a severe impact on the profitability and even solvency of airlines that make bucks by facilitating travel across the places.

Here is how these four ASX-listed airline stocks have fared this year: 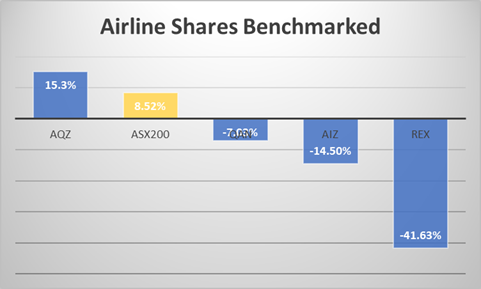 Qantas Airways Limited (ASX:QAN): Headquartered in the suburbs of Sydney, Qantas Airways is the flag carrier of Australia and the country’s largest airline by fleet size, international flights and international destinations. Founded over a century ago in November 1920, Qantas is also the world's third-oldest airline still in operation. The airline began international passenger flights in May 1935. Shares of Qantas have lost 7.03% on year-to-date basis when the broader markets have been in the green.

Alliance Aviation Services Ltd (ASX:AQZ): Voila! Now here is a surprise. The airline industry might be in doldrums, but this company has outperformed even the larger markets. Gaining 15.3% this year, the company has outperformed even the star index of ASX – S&P/ASX 200 Financials. There is a logical reason for being the outlier: Alliance Aviation Services is a provider of contract, charter and allied aviation services to the mining, energy, tourism and government sectors, both domestically and internationally. While tourism might have been hit hard, the other sectors gained a lot of traction, as the country contnued to shed the recession blues.

Regional Express Holdings Ltd (ASX:REX): If there is bloodbath in any of the four major listed airline stocks in Australia – it is in this. The company’s shares have tumbled 41.63% on a year-to-date basis – and it is officially in a bear zone. A bear zone is when a company’s shares tank 20% below its life high. Currently, the company’s shares aren’t even half the worth they were at its peak in 2021. For the uninitiated, Regional Express Holdings is the parent company of a number of airlines and associated companies in Australia.