The Company continued its drilling as a part of the ongoing strategy to grow the Apollo Hill’s 781,000 ounces Mineral Resource and expects the drilling activity to continue to expand the gold system at Apollo Hill.

Saturn previously upgraded its Mineral Resource in October 2019 and now plans to combine the latest drilling results into a Mineral Resource upgrade, pending for the end of the current year.

The Company received several thick and shallow intersections which further demonstrate the continuity of mineralisation over a number of hanging wall positions along the strike length of the deposit. 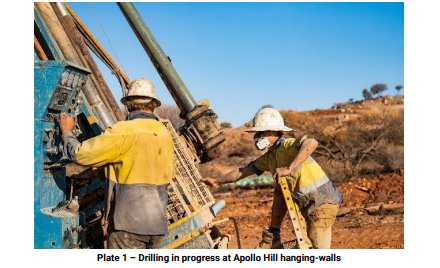 Some of high-grade intersections which confirm the continuity along the deposit’s strike are as below:

Likewise, some intersections on the Apollo Hill main zone improve mineralisation, and some of the significant intersections are as below.

The strongest intersection received by the Company is of 8.25g/t of gold from the drill hole AHRC0513. Rest of the intersections range from 0.94g/t to 2.34g/t of gold.

As per the miner, 29 out of 30 holes demonstrated intercepts above Apollo Hill resource’s cut-off grade and 23 holes witnessed mineralisation above the average resource grade.

Also, as the current intersections are outside the existing Mineral Resource, they represent considerable potential for increasing the size and quality of the gold system at Apollo Hill.

The market seems to be factoring in the recent results announced by the Company, with the stock showing a consistent uptrend from the level of $0.280 (intraday low on 30 March 2020).