The Penny Feasibility Study has led to a reduction in All-in-Sustaining Cost (AISC) to A$633 per ounce from the Pre-Feasibility Study estimates of A$703 per ounce. The study also showed a major hike in the upfront capital cost from A$23.5 million to A$34.5 million. The increase has been majorly associated with the allocation of the costs from the first ore production to the commercial production from the prospect.

Ramelius Resources has completed the infill and extensional diamond drilling program at its Edna May mine. The Mineral Resource has been updated and increased significantly by 22% to 31 million tonnes @ 1.1g/t at 1 million oz.

Edna May hosts the gold mineralisation as sheeted quartz with strike in the North and dip towards the West. Ramelius drilled 75 holes with a combined depth of 7,390m. The Lodes Mineral Resource of the mine stands at 490,000 tonnes @ 4.5g/t at 72,000oz. 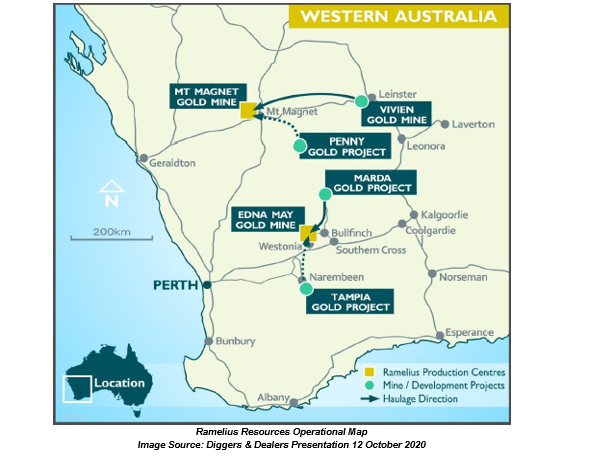 The Company has set the production guidance for the mine project to be 39,000oz for the December 2020 quarter.

The Company has managed to create a stockpile of 330,000 tonnes of ore stock at Marda operations, which is enough for the next six-month processing. Marda produced 220,221 tonnes @1.82g/t for 12,910oz of contained gold.

The Company has set the production guidance for the mine project to be 30,500oz for the December 2020 quarter from Edna May.