The Australian equity benchmark ASX 200 index ended nearly 1% higher on Wednesday led by miners and Information & Technology shares. Investor sentiment got a boost from the developments happening in the global economy as well as in the domestic economy. Easing Covid-19 restrictions in China and April retail sales data in the US eased slowdown concerns. Meanwhile, lower-than-expected wage growth in Australia gave hopes that the RBA may not be aggressive so far as rate hike is concerned.

Although markets opened higher tracking positive cues from the global market, wage price index data released earlier in the day kept the momentum going. The numbers released today were 0.7% higher than the March quarter, while expectations were of a 0.8% hike. The 2.4% annual increase in wage index, however, is still the biggest since 2018. But it was far behind the consumer price inflation of 5.1% and has thus led to the believe that the RBA (Reserve Bank of Australia) may not go for 40 basis points hike in interest rates. Furthermore, RBA still forecasts a slow acceleration in wage growth to 2.7% by June turning 3% by year end.

As a result, the Australian dollar dropped 0.2 per cent to US$ 0.7013. The bond yields also lowered, taking the three-year rate down 4 basis points to 3% and the ten-year yield down 3 basis points to 3.4%.

On the global markets side,

In Asia the Hang Seng remained 0.32% higher and in Europe the FTSE 100 was up 0.72% (by 4:12 PM AEST). The global markets seemed to be extending the New York stocks’ rally, while also weighing China Covid trends, Fed rate-hike talk.

How were industrial sectors placed on ASX?

Most sectors closed Wednesday’s trade on a higher note in line with the ASX 200 Index. Materials was the best performer, gaining 2.51%. Following the lead were Information Technology and A-REIT stocks which gained almost 1.91% and 1.86% respectively. On the flipside, Consumer Staples and Financial

sector were the worst performers of today.

Best and Worst performers of the day 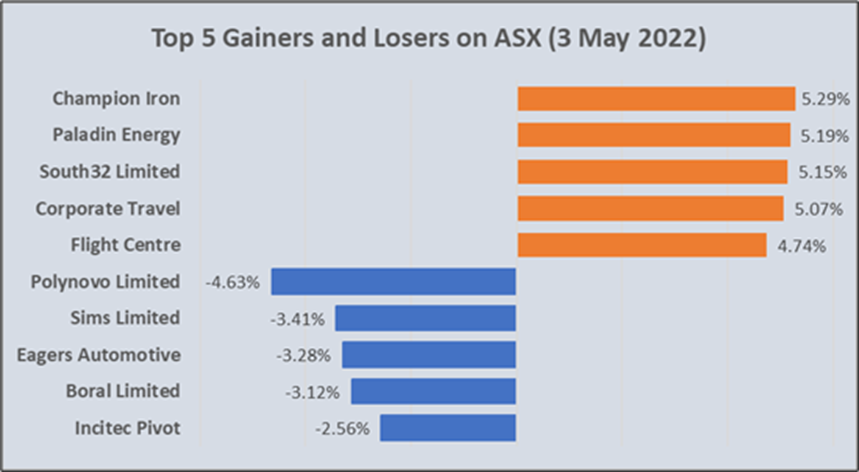 Other noteworthy shares on the ASX today were,