Kleos Space S.A. (ASX:KSS) has received commitments for its $19 million placement. CEO Andrew Bowyer stated that the Company is delighted by the support of existing and new institutional investors, who have recognised the potential of Kleos.

With the placement, Kleos Space would be well funded to execute the launch of the second cluster of satellites, Polar Vigilance Mission (KSF1), in mid-2021.

The investors in Kleos might have got their belief on a strong footing after the Company’s successful launch of the Kleos Scouting Mission satellites (KSM1).

The Company also targets to develop its third cluster of satellites (KSF2), expected to be in orbit before the end of 2021.

On 7 November 2020, the Company’s cluster of four satellites was launched by the Indian Space Research Organisation.

KSS is now capable of revealing dark activities such as smuggling and piracy that are currently hidden. KSM1 is focused on capturing frequency range for push-to-talk transmitters such as walkie-talkies.

Kleos is expecting to launch its second mission, Polar Vigilance Mission, in June 2021. In this mission, the Company would launch four satellites with SpaceX into a Sun Synchronous Orbit.

The mission would provide further data set over new areas and allow to increase customer base. Moreover, it would enable the Company to improve revenue opportunity and double the volume of data.

The new data through this mission would be sold independently or combined with Scouting Mission data.

Kleos expects revenue to flow in Q1 2021 from agreements and contracts that are already in place. These agreements have been executed with the US Air Force Micro-Satellite Military Utility programme, L3Harris (NYSE:LHX), multiple Government entities, among others.

After the launch of the planned missions, the Company would have an expanded revenue generation potential with minimal operating expenses. 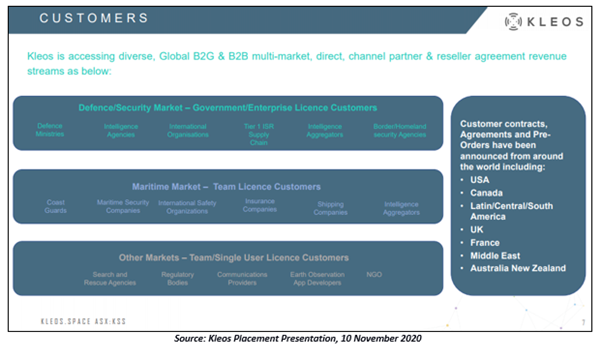 The Company will provide services through a subscription-based Data-as-a-Service licencing to customers.

Kleos has highlighted that an annual licencing fee for the first cluster would be in the range of $128k to $971k per licence. The initial target base for a licence is over 130 users.

Kleos noted that the services are highly cost-effective compared to operating own assets. With additional satellite clusters, there would be an enhanced data set and potential for premium pricing.