Online bookmaker, PointsBet Holdings Limited (ASX:PBH), a constituent of ASX300 index, issued shares to its director, Peter McCluskey and substantial holders, Andrew Fahey and Nicholas Fahey on 21 September 2020. The change of interest comes amid the strong performance of PBH’s business during FY20, notwithstanding the headwinds due to COVID-19.

The strong numbers might just be the right thing to add skin in the game as the Company has posted an impressive performance throughout the year.

Let us look at the changes made in the interest of the director and substantial holders.

Change in The Interest of Director and Substantial Holders

PointsBet Holdings Limited notified a change in director’s interest where the shares issued to the director, Peter McCluskey increased from 401,568 ordinary shares to 438,636 ordinary shares. This change of interest was carried out under the Accelerated Renounceable Entitlement Offer announced on 2 September 2020.

Did you read: Some stocks that have helped investors cash-in the bets: PointsBet, Sezzle

Furthermore, PBH also notified change in the interests of substantial holders, Nicholas Fahey, and Andrew Fahey through the issue of new shares. For Nicholas Fahey, 206,370 ESOP Options were converted to ordinary shares. Moreover, 21,903 shares were purchased under the Entitlement Offer for A$6.50 per share, implying a total consideration of A$142,369. 109,850 ordinary shares were sold on the market at A$11.40 per share for a total consideration of A$1,252,290.

The image below provides a snapshot of the major changes to the relevant interests of the significant holder. 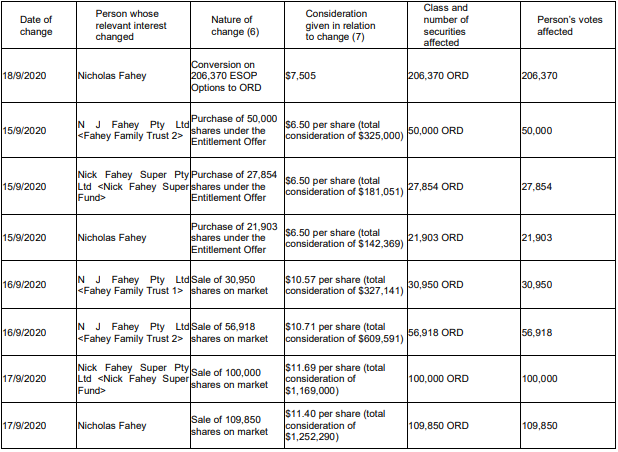 Did you read; Gaming Players under Radar, Playing season knocking off with the new normal

Provider of cloud-based wagering platform, PointsBet Holdings Limited had delivered Net Win of A$75.1 million for FY20 in Australian Trading Business and a successive record-breaking month in the June quarter.

Furthermore, notwithstanding the suspension of sports during Q4 FY20 due to the impact of COVID-19, PointsBet noted net wins of A$7.0 million. The Company’s investment in US State market access, as well as the successful completion of its November 2019 capital raising, remained the major driving force for the growth in net assets of the Company.

After disclosing its financial results for FY20, PointsBet Holdings Limited successfully completed the institutional component of its A$153.2 million fully underwritten 1 for 6.5 pro-rata accelerated renounceable entitlement offer to obtain gross proceeds of around A$70.5 million through the issue of around 10.8 million new shares.

Must read: What is the latest with BrainChip, PointsBet, and Eagers Automotive Share Price?

Being a corporate bookmaker operating in Australia as well as the US, PBH has been keen for expansion across the US.

PBH recently declared the launch of its wholly-owned subsidiary, PointsBet Illinois, LLC in the State of Illinois. Through this, the Company enabled its sports fans in the state to experience the leading online sports betting product offered by PBH.

The launch of PointsBet Illinois means that it can now offer innovative sports and racing wagering products to its customers through a scalable cloud-based wagering Platform owned and offered by the Company.

After the launch, PBH had also taken its first bet and marked the fourth online sportsbook operation of PointsBet in the United States.

The ownership of its technology environment, such as unmatched speed and comfort of usage on a customized platform offers a competitive advantage for the Company. Moreover, this is the Company’s first state to launch following the transformational partnership with NBCUniversal.

PBH expects that NBC Sports’ premium television, as well as digital assets, will help to boost its brand across Illinois, which is sixth largest in terms population. Moreover, the Company’s launch in Colorado, as well as Michigan, are expected to follow in the coming months.

Another transformational event for PBH was the five-year media partnership of its fully owned subsidiary, PointsBet USA Inc with NBCUniversal Media, LLC, wherein PBH became the Official Sports Betting Partner of NBC Sports in the US.

PointsBet obtained access to leading national and regional television and digital assets through the agreement. Moreover, it is expected that the partnership shall offer unparalleled sports betting engagement prospects throughout various platforms while providing significant opportunities in the fast-growing sports betting marketplace.

Interestingly, the unique, extensive, and robust multi-year arrangement shall also drive considerable activation opportunities that are expected to be realised with the continuation in sports betting to thrive across the US.