Megaport Limited (ASX: MP1) is an Australia-based Software & Service company engaged in elastic interconnection services. MP1’s price witnessed a decent gain of ~26.71% in the past one month from the low of AUD 10.67 tested on March 29, 2021. In today’s trading session also, the stock prices were up by 5.21% and settled at AUD 13.510 and was as one of the top gainers of S&P/ASX 200. The stock prices outperformed some of its peers on Friday’s trading session, such as Over The Wire Holdings Limited (ASX: OTW) settled unchanged and Vortiv Limited (ASX: VOR) declined by 6.01%.

How is Megaport looking on charts?

MP1’s prices are forming a series of lower tops and lower bottoms formation for the past 8 months and trading in a descending channel formation. Prices witnessed a fall of ~40 percent from a high of AUD 17.67 tested in October 2020 to the low of AUD 10.67 formed in April 2021. However, the bulls managed to push the shares from the lower levels after a Piercing Line (bullish reversal) candlestick pattern was formed with a gap-up confirmation and added ~26.71% from the March 2021 low levels. The stock prices also broke a downward sloping trend line on the upside in today’s trading session and closed above the same, but still trading below the upper band of the channel pattern. A decisive breakout above the upper band will be crucial to gauge the short-term trend of the stock. 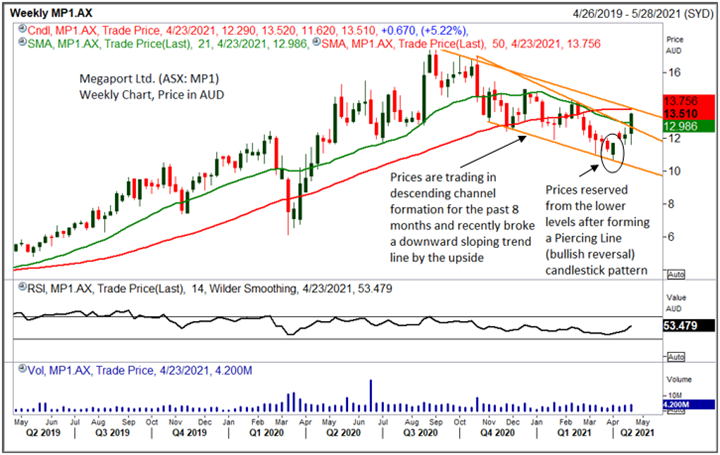 The summary of resistance and support

The momentum oscillator RSI (14-period) is trading at ~54 levels, indicating a positive trend for the stock. RSI recovered from around an oversold zone and the inched upwards. Now prices are trading above the trend-following indicator-21-period SMA, which is in turn providing support for the bulls; however, 50-period SMA is still sustaining above the current market prices which could be a resistance level to keep an eye on.

The summary of technical indicators

After analyzing the current price action coupled with the technical indicator readings, Megaport Ltd. appears to have  recovered from the downward trend; however, prices are still trading below the upper band of the descending channel pattern, putting uncertainties over the short-term trend.