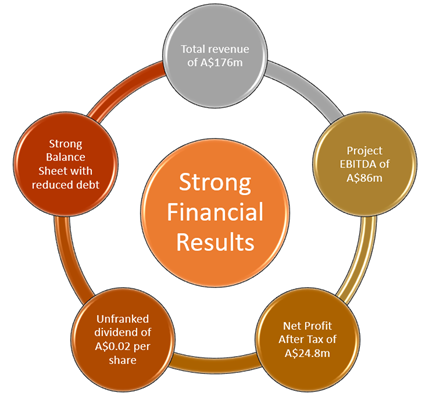 Net profit after tax for CY20 stood at A$24.8 million, around 19.2% higher from A$20.8 million in CY19. The significant increase in profit was registered on the back of strong HMC sales in the third quarter, which steered the company to surpass the guidance range despite the ongoing economic downturn induced by the COVID-19 pandemic.

The demand for HMC continued to soar in Q1 2021, with strong sales of 67kt in the first two months of the year.

As per the company's announcement on 16 February 2021, IMA has moved to a debt-free position three months earlier than originally scheduled. Net cash position stood at A$32 million.

Early debt retirement, robust financial results, and soaring demand for the HMC product channelised the company's management to pay an unfranked dividend to the shareholders, subject to relevant paperwork anticipated to complete in the coming weeks.

Recently, the company released an annual update of ore reserves at its fully-owned, zircon-rich Boonanarring and high-grade Atlas mineral sands projects in the North Perth Basin in WA.

IMA owns and operates ore processing and open-cut mining facilities at the Boonanarring Mineral Sands Project. The company also holds a shallow and high-grade open-pit mine of Atlas Project with mineralisation extending up to 16m depth with an average thickness of 3.5m.