EML Payments Limited (ASX: EML) is a payment solution for brands and helps the disbursement payout’s, gifts, incentives and rewards through its next-generation technology. The company processes more than $19 billion in GDV each year in 27 currencies.

On 30th October 2020, the company addressed its 2020 Annual general meeting and gave a detailed presentation regarding the business performance during recent times.

Achievements for the year 2020

To start with 2020 achievements, the company recognized the opportunity the pandemic had presented and worked on it proactively, which led the group to achieve new height.

Details about the Project Accelerator 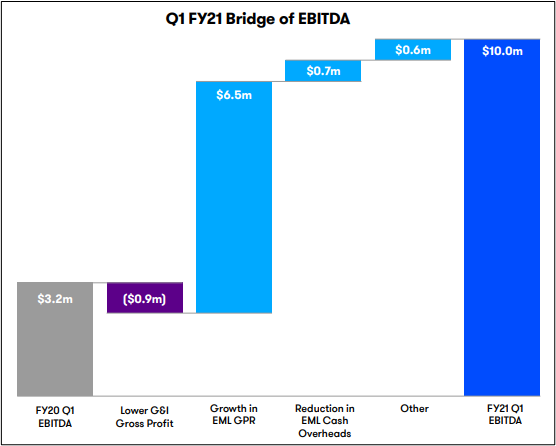 The EBITDA was reported at $10.05 million, an increase of massive 213% as compared to pcp. Q1 is historically the weakest quarter which demonstrates a positive start to the year.

The controlled initiatives reduced the cash overheads by $0.7 million over the pcp (excludes PFS). The cash overheads are in line with the top end of guidance between $64 million -$72 million.

The Gift and Incentive segment grew to $1.17 billion from $1.06 billion on a YoY basis. Healthy growth of 41% was seen on a quarterly basis for Q1FY21. Approximately 600 basis point yield increase was witnessed mainly because of improved trading in mall programs.

General Purpose Reloadable (GPR) has also seen a respectable growth post the acquisition of PFS, which led GDS and Gross profit move up by 24% from Q4 FY20. The older EML GPR segment saw a 16% growth due to higher volumes in gaming and Salary packaging.

Virtual Account Numbers (VANS) segment has been able to recover it’s GDV over the previous quarter and is at consistent yield.

The share price of EML didn’t seem to reflect the enthusiasm amongst the investors and consequently saw a downtick of 4.86% to $3.04 (as at 3:09 PM). This is the sixth consecutive red session for the stock. The share price has fallen by 21% from its October high of $3.97. The YTD return stands at negative 33.9%.