While the virus spread has been relatively well managed in the country, the recent outbreak in Adelaide underscores the fact that the pandemic is far from over.

Many companies listed on the ASX are providing trading updates, while some are disclosing results.

ALS Limited has released half-year results for the period ended 30 September 2020. Revenue for the period stood at $838.8 million, down 8.7% from the same period last year. This decline in revenue has been attributed to the pandemic.

Statutory profit for the period stood at $70.3 million, down $65.3 million due to gain from the sale of the Chinese business in H1 FY20. Excluding Government subsidies and related direct costs, underlying net profit after tax from continuing operations declined by 17.9% to $80.6 million.

For the half-year period, the company’s EBITDA margin across divisions expanded as a result of cost initiatives. 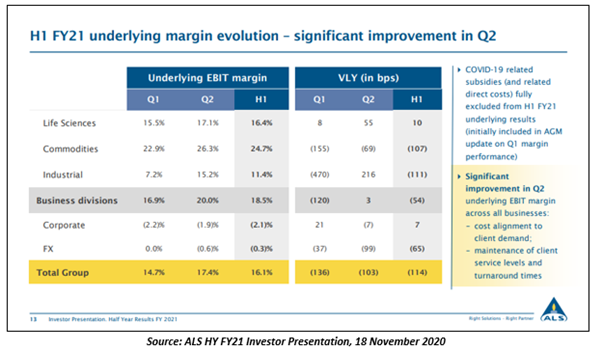 While capex was lowered during the first half of FY21, it continued investing in targeted growth opportunities. These investments include the development of COVID-19 testing opportunities to meet demand over the medium term.

While the first quarter was significantly impacted due to the pandemic, there was stabilisation in the second quarter. The trend has carried into the early third quarter.

ALS continues to look for accretive acquisition opportunities, especially for its life sciences division. Its balance sheet strength is enabling for acquisitions, which meet its strict criteria.

This week, BlueScope upgraded its guidance for the half-year FY2021. It now expects underlying EBIT of around $475 million, an increase of around 80% over 2H FY20. This guidance includes the recent property sale by BlueScope Properties Group.

CEO Mark Vassella noted that the business is performing well, and momentum has carried into the end of H1 FY21. Demand in the Australian market has continued to exceed expectations. BlueScope now expects that construction and manufacturing activity in Australia would be strong.

He also stated that benchmark steel spreads in East Asia and Midwest US are presently above long-term averages. But there remains uncertainty, given the impact of COVID 19 could halt macroeconomic activity.

In the US, North Star is operating at full capacity as automotive volumes are stabilising, while expansion remains on track. Steel spreads are improving, but due to pricing lags in the sales mix, 1H FY21 underlying EBIT is expected to be lower than 2H FY20.

BlueScope Properties is expected to deliver better results due to the recent property sale. Lastly, the performance of New Zealand and Pacific Islands is improving from 2H FY20. This is being driven by stabilising demand after COVID-19.

Accent has reported that sales are well ahead of expectation for the first 20 weeks for FY21 (29 June -15 November). Its like-for-like sales were up 15.7%, excluding Auckland and Victorian stores.

CEO Daniel Agostinelli stated that sales are ahead of expectations after store re-openings in Victoria. Although online sales remain strong, customers are flooding Victorian stores after re-opening in late-October.

The momentum in sales for New Zealand and other states continues, and the company does not anticipate a material impact on sales given the recent lockdown in Adelaide due to store footprint and digital channel sales.

Accent remains on track to open approximately 80 new stores in FY21. In late-October, it opened the first Australian Stylerunner store in Armadale, Victoria. Customer response to the new store has exceeded expectation, and additional three stores were signed.

New Pivot stores in Highpoint, Ballarat and Shellharbour are trading above expectations, and the company is planning to open 15 stores by the end of FY21.

Mr Agostinelli stated that plans are in place to capitalise on the festive season. Accent’s integrated omni-channel model has allowed the business to perform strongly amid disruptions arising out of the pandemic.