On 2 November 2020, CSR Limited (ASX: CSR) released its half-year financial results ended 30 September 2020 with a 15% downtick in statutory net profit after tax to A$58.7 million. The NPAT before significant items stood at A$66.4 million and approx. eight million restructuring cost was deducted towards team reorganisation and streamlining.

The revenue was also down by 6%, from A$1,150.1 million in HY20 to A$1,075.5 million in HY21, primarily due to slowdown in residential construction and lower Aluminium prices. 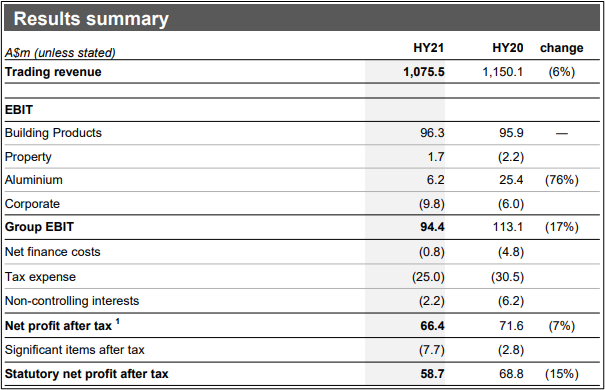 The group EBIT was reported at A$94.4 million, down by 17% from A$113.1 million in HY20. The decreased EBIT reflected lower Aluminium prices and cost reduction. The bifurcation of EBIT is

The group has improved its working capital following destocking initiatives and managing production to sales levels. This has led to an increase of 5% in the operating cash flow, from A$116.4 million to A$121.7 million. Net movement in working capital has also improved from negative A$11.1 million to A$32.5 million.

The group has also reduced the capital expenditure in order to preserve more cash which has come down from A$66 million to A$53 million. Although, the total Capex for YEM21 expected to be approximately A$112 million, including A$42 million towards a property.

The full-year dividend for YEM21 (excluding special dividends) is expected to be in line with the group’s policy to maintain a payout ratio of 60-80% of full-year net profit after.

The group also announced Nigel Garrard’s appointed to the board as a non-executive director, effective 1 December 2020.

He was the Managing Director & CEO of a packaging manufacturing company Orora Limited from 2013 to 2019. He also had a number of senior positions in the same industry.

The stock has already fallen by 8.7% from its October high of $4.93 but trading comfortably above the March low of $2.75. The one-year return of the stock stands at negative 5%.