Bravura Solutions Limited (ASX:BVS) has announced the acquisition of Delta Financial Systems for a total consideration of £23 million or $41.5 million based on FX rate on 9 October 2020. Based in the UK, Delta is a software company catering to the pension administration market in the UK.

The UK-based entity has products that support the administration of self-invested personal pensions (SIPPs) and small self-administered schemes (SSASs). The acquisition of Delta enhances the product suite of Bravura, and Delta’s technology currently supports the needs of over 30 UK clients.

Bravura noted that the acquisition is a natural extension to its core Sonata offering. With Delta, the company’s product and services portfolio would be expanded. Further, the company would be provided with cross-selling opportunities to Delta’s client base.

Delta delivered FY20 pro forma revenue of £6 million and is forecast to record revenue growth of 20-30% along with similar margins to Bravura’s Wealth Management segment. The acquisition, likely to be closed by end-October, is expected to be EPS accretive in FY21 and funded from existing cash reserves.

Share price tanks after growth come to a whisker

After Bravura reported full-year earnings in August this year, its share price tanked substantially. In FY20 ended 30 June 2020, the year-on-year revenue growth of Bravura was mere 6% compared to around 17% in the previous year. Despite a 6% increase in revenue, adjusted EBITDA grew 19% over the previous year, according to the company. 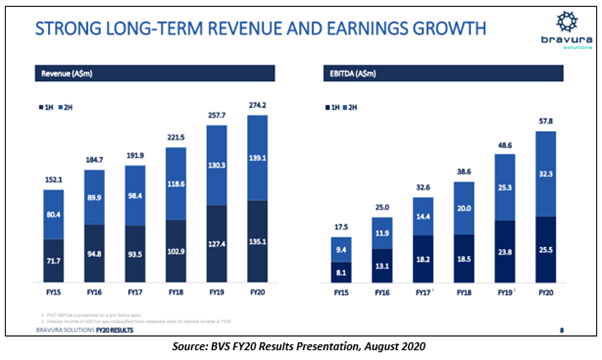 In FY20, the company invested over $36 million in its product suite. The company reported a growing demand from advisors for its digital solutions across the product suite, and this demand was accelerated by COVID-19.

The demand for automation and straight-through processing also continues to grow, underpinned by Bravura Sonata.

Bravura noted that majority of the products and services are delivered remotely, therefore it is well-placed to handle the changes with remote working. Due to its contingency planning, it was able to support clients.

In its annual report, the company also highlighted that current sales opportunities continue to progress, though with the stretched sales cycle. Also, remote working allowed the implementation of technology solutions, enabling its clients to handle superannuation requests in the wake of COVID-19 legislative changes.

At the end of the period, recurring revenue composition inched 7% higher to constitute 77% of the revenue. The driver behind growing recurring revenue was the addition of new clients and broader use by clients.

Bravura clients also have long-term contracts. With a major portion dedicated to recurring revenue, the company stated that it provides a high degree of certainty for its long-term earnings profile and future cash flow expectations.

When the company on-boards a new client, it attracts implementation fees over the initial 2-3-year period. Recurring revenue of the company includes maintenance, SaaS and in-production professional services, and managed services.

Except for recurring revenue, the company records project fees through initial implementation and licence fees are earned on a one-off or recurring basis.

At the end of the year, the company had a cash balance of just under $100 million. During the year, the company acquired award-winning financial planning software provider, Midwinter for a sum of $50 million. It also acquired FinoComp, which provides registry agnostic and microservices for $25 million. Intangible assets at the end of the period stood at $196.2 million, of which $78.9 million were recognised by way of acquisitions.

Excluding taxes, operating cash flow of the company was $32.4 million in FY20, indicating a cash conversion of 56%. Bravura had received early payments in 2HFY19.

One month after the year-end or 31 July 2020, receivables were down to $23.8 million compared to $43.8 million at the end of FY20. It continues to have no borrowings in the balance sheet that reflects its ability to fund the business through internal cash generation.

COVID-19 driven uncertainty has paved opportunities for the company across digital, automation, and microservices ecosystem, but the timing of deal closures has been difficult to predict.

Sales pipeline and transformational opportunities from new clients are supported by its reach in new markets, segments and inorganic growth options. The company is accelerating investments into R&D to meet the expected increasing demand over the medium term.

Although sale pipeline remains strong, the pandemic has brought uncertainty on the timing of deal closures, therefore Bravura speculated that FY21 NPAT could be similar to FY20.

With the potential acquisition of Delta, the company highlighted that it would be EPS accretive in FY21, which may justify the jump in Bravura share price on 12 October 2020.