Despite the impact of a strengthening Australian dollar, which had a negative effect of ~A$15.4 million in revenue, the Company’s unaudited revenue was in line with the H1 FY2020.

What management say about the 1H FY2021 result?

Due to an unrelated corporate acquisition in Cambridge, the Company could attract and set an experienced video development team comprising 11 staff members. The onboarding of four team members got accomplished, and the remaining would start over the upcoming two months. The Company anticipates the team to further strengthen by the closure of FY2021.

The initiative taken by the Company is as per its medium-term strategic priorities which were pointed in the investor presentation and include 165 years of video experience and expertise to Audinate.

Besides the video development team, the Company also hired a Vice President of Strategic Partnerships in Cambridge to focus on corporate development and merger & acquisition prospects.

These initiatives taken by the Company would result in further cash expenses during FY2021 which would be in between A$1.3 million to A$1.5 million. A part of the cash expenses would get capitalised as per the current policy on capitalisation of development costs.

A Glance at  medium-term strategic priorities 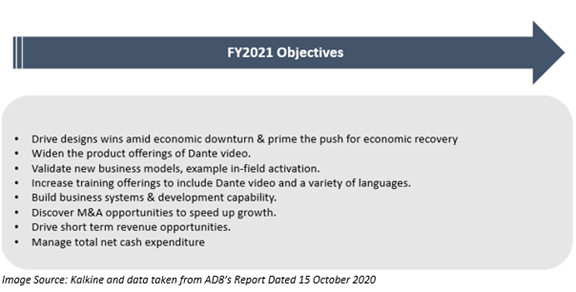 Stock Information: At AEDT 2:31 PM, AD8 shares were trading at A$7.790, in line with the previous close. The Company has a market capitalisation of A$594.01 million.