The benchmark index ASX 200 extended fall by afternoon as inflation fears prompted a sell-off in growth-focused tech stocks. The S&P/ASX200 is trading lower by 80.3 points or 1.12% at 7,092, as investors remained cautious ahead of the Budget announcement in the evening. The tech stocks were the biggest losers on the ASX, led by Nearmap Ltd (ASX:NEA) down by 6.3%, followed by WiseTech Global Ltd (ASX:WTC), which fell 3%.

On the sectoral front, nine of 11 sectors are in red, while Information Technology is the worst performing, falling over 2%. Other sectors that are trading lower includes Telecommunications Services, Consumer Discretionary, Industrials, A-REIT, Financials, Energy, and Health Care. While Utilities and Consumer Staples are the only gainers on the ASX.

Earlier today, the S&P/ASX200 opened in red, tracking weak cues from US market, which ended lower in overnight trade due to sell off in technology stocks. The benchmark index opened lower by 8 points or 0.11% at 7,164.70, on the day Australia’s federal budget 2021-22 is scheduled to be tabled in the evening.

Investors will keep an eye on Federal Budget 2021-22, which will be announced by Treasurer Josh Frydenberg at around 7.30 pm (AEST) today. Frydenberg, who will be presenting his second COVID Budget, is expected to increase spending on mental health support for new mothers and on screening for breast and cervical cancer as part of an AU$354 million women's health package. As per report, budget will propose at least $5 billion for funding infrastructure projects to boost infrastructure and create thousands of jobs. 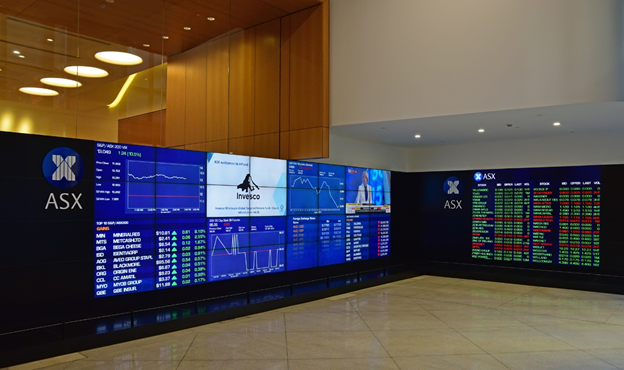 Shares of Cobre (ASX:CBE) was up 4.54% to AU$0.172 after the mineral exploration said that it has concluded the mobilisation to site of both Reverse Circulation (RC) and Diamond Core (DC) drill rigs on the Kitlanya East (KIT-E) project in Botswana.

The share price of Blaze International (ASX:BLZ) jumps 14% to AU$0.041 after the company said it has inked separate and unrelated conditional share sale agreements for the acquisition of Hammerhead Exploration Pty Ltd and Iconic Minerals Pty Ltd. Hammerhead and Iconic collectively own six tenement applications in the Earaheedy Basin of Western Australia spanning over the immediate northern and western strike extension of the latest Zinc-Lead discovery of Rumble Resources Limited (ASX:RTR).

Jadar Resources (ASX:JDR) announced that the company has entered into an agreement with European Lithium (ASX:EUR) to collaborate on the Weinebene and Eastern Alps lithium projects in Austria. Following the announcement, stock of Jadar Resources was trading flat at AU$0.030, while European Lithium share price rose 1.75% to AU$0.058.

Aguia Resources Limited (ASX:AGR) has reported extraordinary results from agronomic tests on rice using Direct Application Natural Fertiliser (DANF) products from the Três Estradas Phosphate Project (TEPP) deposit. The results suggest Pampafos® and Lavrato® to be extremely efficient natural products. The efficiency has been evident in the tests where phosphate from conventional sources, which are chemically treated, were totally replaced. The AGR stock was spotted at AU$0.074.

Share of Woolworths Group Limited (ASX:WOW) is up 1% at AU$40.88 amid report that the ACCC is seeking view on proposed WOW’s undertaking of 65% stake in PFD. The ACCC had outlined preliminary competition concerns through a statement of issues. Subsequently, WOW and PFD had offered a draft behavioural undertaking devised to retain a degree of separation and autonomy between WOW and PFD for three years following the acquisition. The submissions regarding the same are open till 9AM on 19 May 2021 and ACCC’s final decision is anticipated on 10 June 2021.

In the latest announcement, Boral Limited (ASX:BLD) has recommended its shareholders to reject the AUD6.50 offer from Seven Group Holdings (SGH) by taking no action in light of an off-market offer by SGH which intends to acquire 100% of BLD. The offer comprises a total cash consideration of AUD6.50 per share and remains conditional upon no significant unfavourable change in relation to BLD or the S&P/ASX 200 index. Following the announcement, shares of BLD was trading 1.08% higher at AU$6.57.

Health House International Limited (ASX:HHI) share price is up 5.88% at AU$0.180 after the company declared the proposed acquisition of CanPharma GmbH, subject to requisite approval.

Crude oil prices slipped and closed in the negative territory on Monday after a major cyber-attack on the US fuel pipeline system, which disrupted supply in the country.  Brent crude closed 0.15% lower at US$68.19 a barrel, while US West Texas Intermediate (WTI) price dropped by 0.15% to $64.80 a barrel. Reacting to the news, shares of Australian energy companies such as Santos Limited (ASX:STO) Beach Energy Limited (ASX:BPT) and Oil Search Energy Limited (ASX:OSH) remained under selling pressure, falling up to 2.5%.

Gold prices inched higher as lower-than-expected US jobs data raised hopes that interest rate may remain low in near term, boosting investors’ appetite for yellow metal. The June gold contract was up 0.24% or US$6.30, to US$1,837.60 an ounce.

Meanwhile, the price of iron ore surged for a third consecutive trading day. The prices have risen over 20% in the last week amid increased production of steel in Chinese mills. S&P Global Platts said its IODEX 62% iron ore index rose US$16.80 or 7.9% to US$229.55 a tonne.