The Australian share market closed higher on Friday, snapping previous session losses, on the back of a surge in buying across tech, telecom, healthcare and consumer discretionary stocks. With this, the equity market ended higher for the fifth straight week as investors shrugged off rising inflation concerns, considering that would be temporary as predicted by the US Federal Reserve. However, a surprisingly hawkish tone from the Fed and falling commodity prices restricted market gain.

The market breath, indicating overall strength of the market, was strong, with eight of 11 sectors ending in green. The information technology emerged as the top performer with 3.46% gain, tracking overnight gains in the US counterpart. Outperforming all the sectoral indices, the tech sector has gained 6.05% in the five sessions.

Energy sector remained the biggest loser for the second day, falling 1.90%. Among others, materials and financials also ended in red. 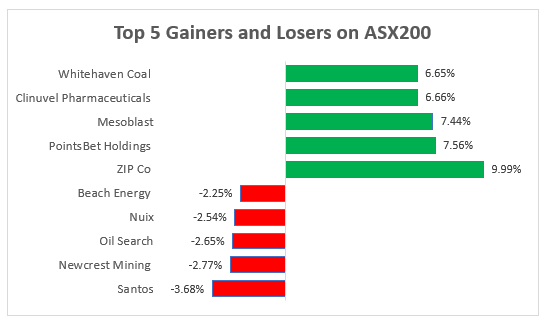 On the flip side, energy firm Santos Limited (ASX:STO) was the top percentage loser on the ASX, falling 3.68%. Some of other worst performers were Newcrest Mining Limited (ASX:NCM), Oil Search Ltd (ASX:OSH), Nuix Limited (ASX:NXL) and Beach Energy Limited (ASX:BPT).

National Australia Bank Limited (ASX:NAB) has reached an agreement to settle a class action related to the bank bill swap rate (BBSR) and the trading of BBSR-related products. The company did not disclose the terms of the settlement, however, it mentioned that the claims had been dismissed on jurisdictional grounds.

Woolworths Group Limited (ASX:WOW) share price dropped after the company was taken to court by the Fair Work Ombudsman in relation to major underpayments of its salaried managers. Responding to Fair Work’s legal action, the supermarket giant says it is currently reviewing the Fair Work Ombudsman’s filing of Federal Court proceedings.

Shares of Bubs Australia (ASX:BUB) jumped 24% to 46.5 Australian cents after the infant formula and baby food maker announced its entry into US markets via Walmart.com. BUB’s products will be made available through Amazon as well to scale access to the market immediately. The company shared its Aussie BubsTM infant formula range, which would be launched online in the US in September 2021.

Shares of Arafura Resources Limited (ASX:ARU) gained as much as 3% to 17 Australian cents on potential funding for rare earths project. The rare earths producer has got a 'without commitment' letter of support from the Northern Australia Infrastructure Facility on a funding package for its Nolans project in Australia.

Shares of betting technology firm BetMakers Technology Group (ASX:BET) climbed 13% in its biggest single-day jump since 17 February 2021.The company has completed the acquisition of Sportech's ROD racing, tote and digital assets in the US, the UK and Europe. The deal will help BetMakers in its global expansion.

Shares of Sydney Airport (ASX:SYD) rose as much as 1.7% to AU$6.15 after the airport operator reported a surge in passenger traffic in May. As per the company, total passenger traffic rose to 1.4 million in May 2021, from 93,000 passengers in the same period last year. The traffic, though, was still lower than the pre-pandemic figure of 3.5 million passengers registered in May 2019.

Starpharma Holdings Limited (ASX:SPL) gained as much as 7.4% to AU$1.67, after its antiviral testing showed potent effect on COVID-19 variants. The company stated further antiviral testing had confirmed SPL7013, the active in Starpharma’s antiviral nasal spray VIRALEZE, had potent virucidal activity. As per the company, the active works against the Alpha (UK), Beta (South Africa) and Gamma (Japan/Brazil) variant strains of the COVID-19 virus.

The shares of software firm Altium Limited (ASX:ALU) gained as much as 3.3% to AU$35.64 on Friday. The company, in an investor presentation, underscored its strategy and key objectives, days after rejecting US peer Autodesk's buyout offer, with analysts expecting rival bids to materialise.

NRW Holdings Limited (ASX:NWH) rose as much as 5.7% to AU$1.59 amid its best session since 20 May. The mining services provider said it had received a letter of intent from Karara Mining to award a contract for mining services work at its iron ore mine in Western Australia. NRW stated the anticipated value of the contract was about AU$702 million over a five-year duration.

Shares of AWN Holdings Limited (ASX:AWN) jumped as much as 56.87% to AU$1.25 after the investment firm said its unit VivoPower International Plc had signed a definitive agreement with Canadian industrial equipment distributor Acces Industriel Mining Inc.

Asian markets remained under pressure on Friday, following weak cues from Wall Street, which ended lower in overnight trade. The Federal Reserve's hawkish outlook on interest rates dented market sentiment, while a rise in the US dollar and Treasury yields also put pressure on regional stocks.

Meanwhile, Hong Kong’s Hang Seng was the best performer in the region, rising 0.6%. Seoul's KOSPI trades up by 0.1%.

In the overnight trade on Thursday, Wall Street ended mixed amid persistent concerns over the US Federal Reserve’s hawkish stance. The Dow Jones fell 0.62% and the S&P 500 dropped 0.04%. Bucking the trend, tech-heavy NASDAQ Composite ended 0.87% higher as market participants opined that the economic recovery would boost demand. The Fed expects the first post-coronavirus rate hike to happen in 2023.