Australian shares were trading near the day’s low by the afternoon amid a broad-based sell-off. The market witnessed stock specific movement with investors reacting to earnings numbers, while persistent concerns over rising COVID-19 cases also dampened investor sentiment.

Today is going to be the powerpack day for earnings season with as many as 18 companies are slated to release their earnings report. Some of the big names include real estate investment trusts Dexus and Charter Hall, energy firm Santos, financial company Magellan, Shopping Centres Australasia, SG Fleet and Sims. Blue-chip miner BHP will also release its results just post market hours. 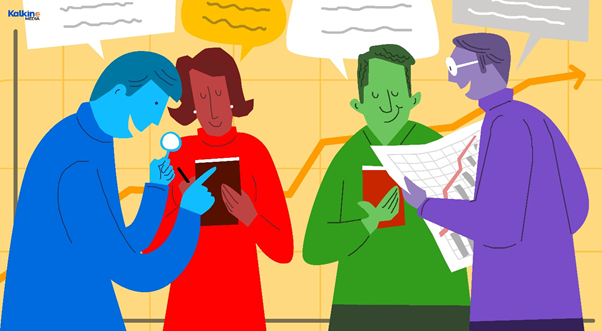 Shares of Breville, Santos, Dexus, Sezzle, and Magellan were all trading lower after releasing their earnings this morning. BHP (ASX: BHP) was also down over 1% ahead of its earnings report this afternoon.

On the sectoral front, 10 of the 11 sectors were bleeding in red. The financial sector was the worst performer with a 1.4% loss, followed by energy and material which fell over 1% each. A-REIT, utilities, information technology, consumer discretionary and health care also witnessed selling pressure.

On the COVID-19 front, NSW recorded 452 new locally acquired infections in the past 24 hours, while Victoria registered 24 cases. Premier Gladys Berejiklian says the case tally in NSW is likely to “rise substantially” as the virus continued to spread through the state.

Shares of Australia’s biggest gas supplier Santos (ASX:STO) fell over 1% despite reporting robust earnings. The company reported a profit of US$354 million during the first half, while revenue rose 22% to US$2.04 billion. The company also declared an interim dividend of 5.5 US cents per share.

Shares of Westpac Banking Corporation (ASX:WBC) were down 1.5% after the lender issued a business update for the June quarter. Australia’s second-largest bank indicated a return of capital to shareholders following buybacks and a dividend announcement by its big four competitors.

Shares of Breville Group (ASX: BRG) dropped over 7% even after posting strong growth in profit and revenue.

Aventus Group (ASX: AVN) shares traded marginally lower after the company sold the MacGregor Home Shopping Centre to Stirling Property for AU$42.15 million. The property, located in Queensland, was sold at a 56% premium to its December 31 book value.

The share price of Monadelphous (ASX: MND) was up 0.5% after the company secured new contracts. The engineering company has bagged new construction and maintenance contracts in the resources and energy sectors valued at around AU$200 million.

Natural gas producer Senex Energy (ASX: SXY) saw its shares trading 0.5% higher following an update on Atlas project expansion. The company in an ASX filing said the final investment decision had been taken for the AU$40-million expansion of the natural gas production at Atlas by 50% to 18 petajoules a year.